I thought I would take a moment to share the things I bought at Disneyland. Then I thought also I would give a couple of thoughts on the 60th Anniversary happenings. The castle, for instance, I was not prepared for: I had seen pictures of its crowns and banners, but none of that showed how beautiful it looked in person. It glistened in the sunlight, truly part of the Diamond Celebration: all the little top pieces on the towers catch the sun and twinkle like jewels. 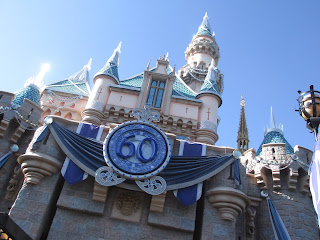 I was undecided on whether or not to watch World of Color. Ultimately I decided not to since I was going with a couple of people who'd never been to the parks and I decided I'd rather have them watch Fantasmic than World of Color. We did watch the fireworks twice, though. The first day in front of Small World and the second day at our spot (by the railing) in front of Rivers of America. Okay, they weren't as much a celebration of the park as the 50th fireworks were, but they were nonetheless wonderful. The projections added something extra special, Nemo traveling along Tinker Bell's route was fun, and the snow during "Let It Go" was just . . . wonderful. I've seen snow in Disneyland during December, but I didn't know they had brought it back for summer, too: talk about bringing out your inner child.

Now let me go back to my purchases. I feel like I didn't buy much this time--though I in fact bought more than I usually do (except maybe the time I went during my birthday--but I had some birthday money and a gift card that time). I started off with pins. I like to keep my pins on lanyards (as opposed to those binder carriers they sell) so that I can hang them up and see them all the time. I already had two full lanyards, so I bought a new black one. It's already half full. 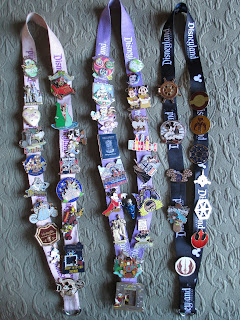 I already bought the seven-piece set of Star Wars symbol pins. I really only wanted the Jedi Order, Rebellion, and Empire ones, but you have to get the set for them, so I did. I also picked out a simple 60th Anniversary pin (a blingy Mickey hat) and a Splash Mountain pin: I'd been needing a Splash pin since it's one of my favorite rides. If you're curious, you can see my 50th Anniversary pin fifth down on the left edge there on the pink lanyard.

At the parks, I wore the new black lanyard this time, filling it with some new pins and some of my favorites of the other pins. If I remember rightly, I wore the Partners statue, POTC, the blue Tower of Terror, the Crocodile, Mr. Toad, the Teacups, the Matterhorn (maybe), the Storytellers statue, Yoda, Fantastic, the 60th pin, Splash Mountain, and the Rebellion pin. Maybe I wore the Disneyland sign also. For some strange reason, I never took a picture of the lanyard I wore before I put everything back the way it was (I like to keep them on the lanyards in the order that I bought them in). 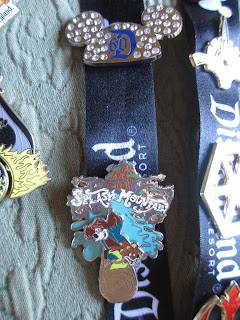 As I've mentioned, I also bought all three boxes of the 60th Anniversary truffles--that's the main place where I emptied my wallet. A couple of years ago, I bought some of the Wonderland tea and really enjoyed it, so I bought a tube of English Breakfast tea this time--and somehow completely forgot that the other tea was loose and this one was just tea bags. I must've been distracted when I was picking it out: given the choice, I always prefer loose tea. And it isn't as good as the tea I got before: it's okay but nothing special and so I guess I only got it for the container. 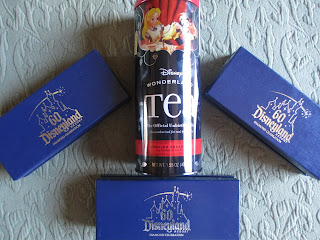 I kept admiring the journal with the 60th Anniversary Diamond Celebration castle on it, all glistening with bling. On the first night at World of Disney, I thought that I would wait until after I'd been in the parks to get it: you know, in case I saw something else in there that I'd rather get. I almost bought it at the Emporium. And then when I went back to World of Disney the day after the parks, I still didn't get it (I don't know why: I love notebooks and it was like a little bit of history). Instead I got this book about the making of Cinderella. It's a lovely book and I'm looking forward to reading it, but I'm not sure I should have spent the money on it (especially since I didn't spend it on the journal I kept stalking--which was half the price of this book). 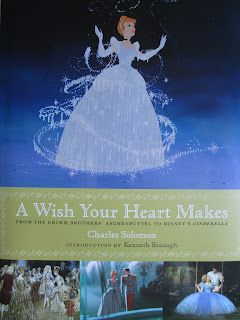 And then because I'm crazy, here is a picture of the bags the stores are using right now. That's the bling castle that was on the notebook I liked. And I suppose I'd better stop showing pictures now before I start putting up a picture of the park maps and the napkins. 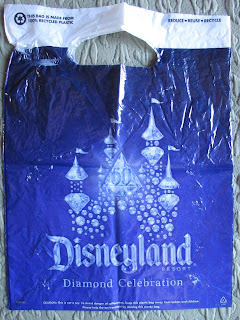 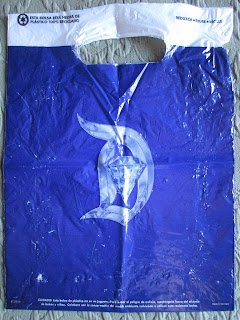 Posted by Deanna Skaggs at 3:22 PM