Wow, are we already on the fifth installment, The Clone Army Attacketh, in the Shakespeare's Star Wars series? It's all flowing along so easily and simply now, like it was all meant to be. 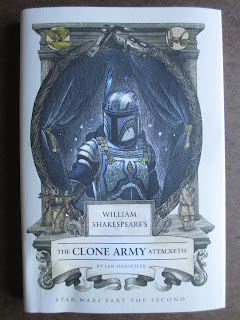 As I've mentioned before on some of the more recent installments, the comedy is lessening now (it's still there, just less often) and instead these books are becoming more of a celebration of what makes Star Wars great. And let me also say that Episode II benefits rather heartily from Shakespeare-ization. (Or maybe I secretly like Episode II more than I thought I did, given that it was also one of the novelizations I enjoyed more, despite the fact that I generally think of it as the weakest movie from the two trilogies.)

First we have Anakin and Padme's scenes together. They run more quickly in Ian Doescher's retelling and the dialogue, while still essentially the same, is much improved: a certain kind of sappiness is okay in Shakespeare language because it is more pristine and it is intentionally moved to a higher dramatic and poetic sphere than regular life. So what sometimes came off awkwardly in the movie came off rather lovely in its Shakespeare-ization.

All of the politics are condensed, too, so that you get the theme and all of its importance before you get all the little details about voting and government loyalties and such. Makes for great readability and, again, easy taking in of the overall theme.

One of the nicest scenes in the movie is when Anakin is riding out to find the Tusken Raiders: the colors and the music and the black cloak and the determined fury in his eye. And it was portrayed just wonderfully in words--that's the heart of tragedy right there.

As far as Nicholas Delort's illustrations, my favorites this time were the one of Taun We and the one of Anakin and Padme on Naboo.

The sprinkling of Shakespeare quotes and references tends to be more subtle now--and is somehow even more satisfying now being that it's this way. So even though it's a half ridiculous idea to have a Shakespeare-ization of all six episodes (or perhaps because it is), I am still thoroughly enjoying this ride.