I'll just go ahead and say that I received some sad and unexpected news that I'm not entirely sure how to process. So if I start adopting a strange tone, that would be why. Now let me move on to today's post.

While reading the Star Wars novelizations, I wasn't sure where I would go next--until I saw that all the old books are now considered non-canon and only the new ones are canon. So that makes it easy: for now, I'll start with the canon books, in published order. A New Dawn is first; it's something of a prequel to the Star Wars Rebels series. 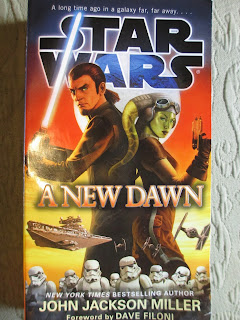 For being a prequel, though, it has much less from the TV show than I might have expected. It's the story of how Hera and Kanan met--but it's slow-moving until they even have a full conversation and the plot keeps running on as if it's leading up to something big. And yet it never seems to reach that something which it's leading up to.

It's the story of one of the Empire's faults against the people, of the beginnings of Hera's quest to start a rebellion against the Empire, and of Kanan's journey from trying to stay out of everything to remembering his place in the world. Which are all good and well; it's just that I wanted a little more resolution at the end: I wanted them to actually have a conversation about the fact that Kanan is a Jedi in hiding. Otherwise it feels too matter of fact that Kanan joins Hera. Maybe a sequel is planned that will fill in the space between A New Dawn and Star Wars Rebels?

I did enjoy getting a different look at this universe: a different planet, a different type of characters, even a different type of plot. I also grew rather fond of Zaluna's character: the way that she's so smart and efficient, observing everything, and yet also small, hesitant, and vulnerable. While we're talking about characters, for that matter, Kanan and Hera are both great. Kanan is strangely, like a combination of Luke Skywalker and Han Solo--plus a lot of self-doubt. Hera is bold and quick, courageous and commanding and yet also empathetic and kind: the perfect leader.

So while I wouldn't say I loved this book overall, as an extension of the Star Wars universe, I'll take it.

Posted by Deanna Skaggs at 3:08 PM