Click here for my review of the first box, from Steakhouse 55, and here for the second box, from Blue Bayou.

It's been a fun journey, but now I've come to the last of the Diamond Celebration truffle boxes from Disneyland. It's bittersweet--and yet it also feels like like all the thoughts I've given toward these chocolates have now been fulfilled. I have conquered the Disneyland truffles. 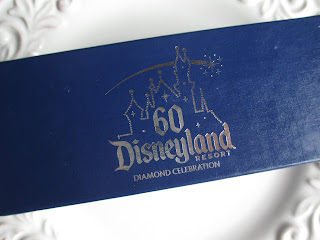 So. The third box is from Carthay Circle. Given that it's a fairly new restaurant and looks very much like a fine dining restaurant, I've never eaten there. I did the same thing as before and asked the hostess at the front (which is sort of outside of the building, though underneath the roof) about the truffles. She sent me inside to the lounge; I hadn't even known that the restaurant has a lounge. I sat down in one of the chairs and felt a little awkward because I'd left my group outside, thinking that I would be fairly quick (I don't know why I was thinking that).

But despite feeling odd that I was alone, I was also delighted to have come into this building. The lounge is fairly big, almost like two rooms, and is decorated in elegant, early 1900's (I believe 1920's, right?) style. Gorgeous. It was kind of thrilling that these truffles gave me the excuse to go in. There was only one waiter taking drink/appetizer orders from everyone in the lounge, so I would say service was on the slow side in general, not just for me. I would probably recommend stopping in for a drink while you're getting your truffles: it takes long enough already that you might as well stay a few minutes longer. It's a lovely place to be in, after all. 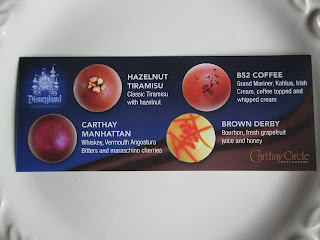 By the time I had ordered my box of truffles (by the way, this is the only box where you're required to show ID that you're over 21), my group wandered in to wait with me--which was good since this was only about the halfway point in how long I had to wait. Once again, the waiter brought the truffles with the check--and once again I felt like I should leave a small tip even though I wasn't eating or drinking there. But it was strange. I felt like this waiter didn't give me as good of service as I received elsewhere, including from the Carthay Circle hostess. He wasn't rude. But he didn't seem as friendly. And then it seemed to take so long. I decided he must be very busy and therefore could use a tip--I also thought that probably most people who come in just for truffles don't leave a tip and therefore the people who have to go to trouble to give them their box get a little disgruntled that they go through all that without even getting a tip.

I guess I'm overthinking everything. 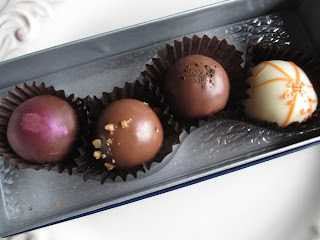 Not as happy-looking as the Blue Bayou truffles, the Carthay Circle set looks more similar to Steakhouse 55's group: they both even have one white chocolate, two milk chocolates, and one dark chocolate.

Let's begin with the Carthay Manhattan: "Whiskey, Vermouth Angostura Bitters and maraschino cherries." This is dark chocolate with a dark ganache and a shiny purple top. The ganache here is very smooth in texture and the truffle tastes simply of cherries and dark chocolate; it's very good. The alcohol flavor tends to come in more at the end, in the background, or with your second bite; it fits in with the flavors and doesn't feel biting or out of place. A pretty good truffle. 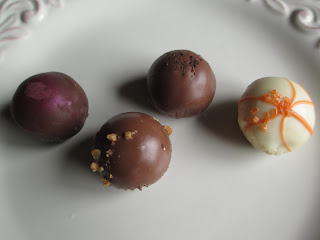 Next is the Hazelnut Tiramisu: "Classic Tiramisu with hazelnut." A milk chocolate shell with that slightly darker ganache and bits of hazelnut on top. The primary flavors are warm: milk chocolate, vanilla, light coffee, brown sugar, hazelnut. And yet it isn't overly sweet: there is coolness also to all of those warm flavors. It's a simpler truffle than the Manhattan, but still quite nice. 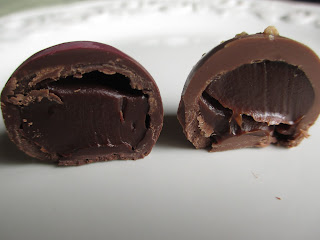 Third is the B52 Coffee: "Grand Marnier, Kahlua, Irish Cream, coffee topped and whipped cream." Another milk chocolate shell holds a dark chocolate ganache has tiny sprinkles of coffee as a garnish. The flavors take half a second to appear and then, wow, they all come in together magnificently. Chocolate (both milky chocolate and rich chocolate), coffee, cream, and vanilla. Is it sweet? A bit. Is it rich? Somewhat. But what it really is is so balanced, everything coming together to create one elegant flavor. It's really good--possibly my favorite out of all three boxes. The case may be that these are simply my flavors; but still I would call this truffle fantastic. 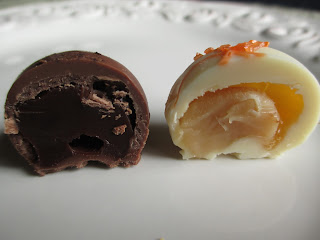 And the last one is the Brown Derby: "Bourbon, fresh grapefruit juice and honey." Despite the name, this is the only white chocolate shell, with an accompanying white center and an orange stripe pattern and orange sprinkles on top. I would have called it the prettiest truffle from the box except that it came lopsided: some of the filling leaked and when I cut the chocolate in half, I could see the filling sitting in a partially hollowed shell. That's neither pretty nor detailed. The first flavor is citrus, which quickly narrows into grapefruit and is followed unmistakably by honey and then by white chocolate. Honey also stays as the after taste. So it is the honey that dripped out of the shell; while it's great that they added honey, I do wish it could've been kept more stable. Still, it's definitely an interesting flavor combination and one that I'm finding unique and enjoyable. It's pretty nice.

Hands down, this was the best box of the three, just as Blue Bayou's was hands down the worst. All of the truffles in here were good, though some were better than others. This box might even justify its $16.99 price tag. So it would seem that my theory was correct: the quality of the truffles does seem to coincide with the quality of the restaurant. (That is, I've never eaten at Carthay Circle but it looks like it could be better than Steakhouse 55, though I'm certain that both are "better" than Blue Bayou, much as I love Blue Bayou.) So if you get only one box and you simply want the best box (as opposed to wanting to try certain flavors), I would recommend this one.

I was a little worried when I heard that you'd need ID for this box: usually chocolates with that much alcohol taste bad. Maybe it's just because those tend to be the cheap chocolates, or because the focus with them is more the fact that they have alcohol than a slightly more complicated flavor profile. But these truffles certainly didn't taste bad; I don't think they even tasted cheap--and they also didn't taste all that much like alcohol. The Carthay Manhattan probably tasted the most alcoholic, possibly followed by the B52 Coffee (although that one's odd because it tastes like Kahlua, which already doesn't taste that much like alcohol itself).

Can we do that again?

Or maybe I can: while reviewing, I was only eating one half of each truffle. So now I have one half of twelve truffles to eat at my leisure--no, I am not sharing with anyone.

This was a great idea, Disney. Thanks for the truffles. Maybe make another set for the 70th anniversary please?
Posted by Deanna Skaggs at 3:46 PM