To Kill a Mockingbird was one of the books we read freshman year of high school. Most of the books we read in that class were disappointing: they felt overly simple, like books I could have read in fourth or fifth grade instead or at least spent much less time on because their themes and messages were, frankly, too easy to want to spend any more time on (because, you know, I was around that age where I needed books to challenge me, and these weren't challenging and therefore they were boring and felt like a waste of time). To Kill a Mockingbird was better than probably all of these--but still it somehow became grouped in my mind with them and so I never had much of a personal connection with it or anything much of the deep admiration it supposedly has. 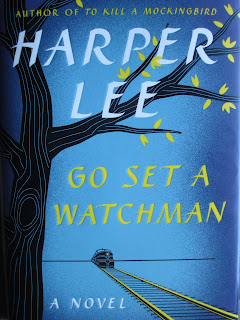 But, you know, I wasn't about to resist something as interesting as the situation of Go Set a Watchman. As you all know, this book is what Harper Lee originally gave to publishers--and it became edited and rewritten into To Kill a Mockingbird. So to have that old manuscript suddenly published as a sequel, well, that's just interesting from the point of view of analyzing the situation and the progression of writing style or character treatment or any of that. And of course since I'd decided to read it, I thought it would be best to read it quickly so that I could read it with no other opinions on it than my own.

Here is my very brief reaction: I liked it--more than I remember liking To Kill a Mockingbird. That was a book approaching things almost in a Huck Finn way (not exactly, but sort of): the children are just living their lives and looking at things through a child's perspective while greater issues (of which the reader is aware) are surrounding them. Go Set a Watchman is more along the lines of books from the 1960's, almost like Invisible Man at times (I mean, in the way it approaches certain things or some of the issues it addresses). It's such a stark portrayal of a socio-political situation and its bearing on individuals--and it's also such an interesting look at internal thought processes and the way in which one mind makes its way in the world.

As far as format goes, there were quite a few more flashbacks than I had expected, given that this book was marketed as taking place two decades after To Kill a Mockingbird. But I liked the way that the flashbacks were placed with the present day scenes and the way in which random scenes come together to put certain concepts in your mind and drive you toward a certain theme, a certain conclusion, a certain state of awareness.

Now here are more details--feel free to skip them if you haven't read the book yet.

I never thought I had such a clear picture of who Scout is until I found myself reading from her 26-year-old perspective and saw that she was still the exact same person, mannerisms exactly the same even translated from a child into a woman. Just seeing her suddenly as an adult had a certain joy and familiarity to it: it was a singular experience.

The beginning third of the book or so moved along at a leisurely pace, and yet I enjoyed it being so. I was just along for the ride: I never read the book summary and so I really didn't know what to expect. I was just content to take things as they came. And then suddenly it seemed we'd arrived at the crux of the matter: the meeting.

Although I, like Scout (I can't call her Jean Louise--she's still Scout to me and I'm guessing to everybody else, too), hoped that it was a misunderstanding, it genuinely hurt to have the image of Atticus shattered. And that surprised me. I'd spent all these years thinking I was supposed to admire Atticus because he was so smart and talked to his children like adults and he defended an innocent man in that trial without letting race get in the way of what was right--and the thing is, I never felt admiration for Atticus. I knew I was supposed to admire him, but I never felt admiration. He was just a character who was supposed to be admirable. And yet when his image shattered, it hurt.

Here's what I mean about timing. I guess I was 14 when I read To Kill a Mockingbird; that's certainly older than Scout was in the book, but it's still young. Now I'm nearly 24, reading Go Set a Watchman, in which Scout is 26. We both sort of grew up in the interim, and now we're looking at our lives in slight shock at what we're finding, realizing that even though we're already grown up we still have to look back and look around and interpret it all for ourselves.

There I was thinking this book was about a very specific time in history. It's so full of conversation about race and social situations and the politics of it all (to the point of being not just "of its time" but also a little out of date), and yet it's like I've just realized it's about none of that at all.

It's about Scout realizing that she has to think for herself. And that's the biggest difference between Go Set a Watchman and To Kill a Mockingbird. When Scout's a child, she learns about not judging based on appearances--but she's kind of just living her childhood and that's all: the socio-political situation is there more for the reader than for her. But when Scout is an adult, she is actively taking part in the "politics of it all:" she gives her opinion, she reacts to the actions of others, and she gets into a huge amount of distress over the mess she sees in her community.

But we're glad that she's distressed: there is a mess and she understands that the mess needs to be fixed. And it is because, over the course of the book, Scout is able to arrange her errant thoughts and reactions that she can now become a full-fledged member of her world and her society and have a positive influence on it.

I hope we all can achieve as much.