1) Cameo Rings - Usually when I see cameo rings, they're either too new or too big, so when I found these two together, I had to get them both. They're from a little antique store in Carlsbad called Olde Ivy Antiques that usually has good things. With my non-expert eye, I would guess that the brass and black ring is older--and it's probably my favorite, too, though I do like them both. 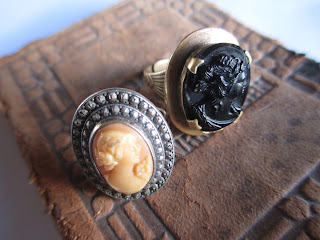 2) Harney & Sons Paris Tea - Whenever I'm around San Diego, I have to go to Rust General store in the Historic Old Town District: they have food (mainly of the seasoning and sauces type), chocolate, and tea. I don't know of anywhere near where I live that sells Harney & Sons tea. Last year I got the vanilla kind, and this year I chose Paris, which is a black tea with fruit, citrus, and vanilla. It is a tea after my own heart, absolutely lovely. 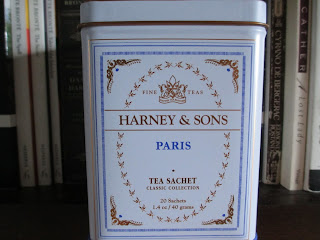 3) Her Universe: High Commander Cardigan - I've been waiting to get this sweater since Spring: I wanted it when it first debuted but by the time I'd set aside the money for it, it was out of stock in my size. But now I have it in time for Fall. I love how subtle and yet recognizable it is: it's just a plain sweater and yet it's just like those uniforms in Star Wars. 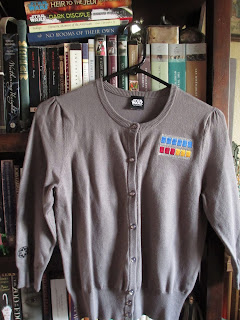 4) Wooden Notebook - This one came from a different shop in Old Town San Diego, after I had already made all the purchases I'd planned. But I love wood and I love notebooks, so how could I resist a wooden notebook? 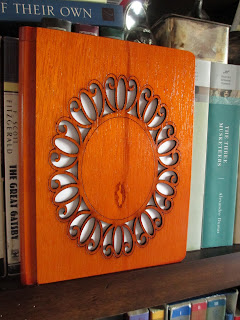 5) Paqui Tortilla Chips: Very Verde Good - I found these at Whole Foods; they're basically like Cool Ranch Doritos, only much, much better. They're so good it's ridiculous: I have an extremely hard time stopping eating them and I'm not one for big portions of the same thing at one time. Basically they have the taste of green salsa and cream on a tortilla chip, but you just have to try them for yourself to see what I mean. 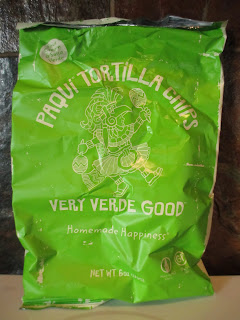 6) Oaxacan Animal Figures - Making the fourth and fifth addition to my collection of green Oaxacan animals, I got this little dog and the rooster at the Pueblito Cuetzalan corner of the Marketplace-style store in Old Town San Diego: I generally find that they have the best figures there. 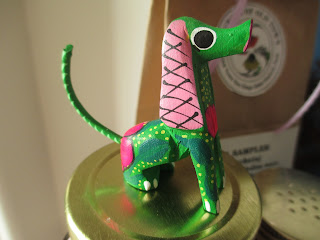 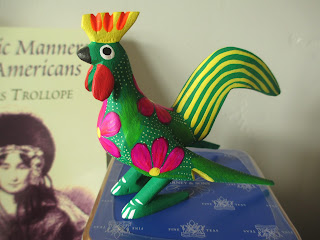 7) Montana: Caitlyn Shoes in Mahogany - Okay, so I haven't really worn these shoes yet--but how could I resist showing them off? They're going to be my cool weather shoes, perfect for wearing with tights, a skirt, and a sweater. I was laughing because I was looking in the Dillard's shoe department and showing no interest in any of the shoes until I got to the "comfort shoes" corner--which might also be considered the old lady section--and there I was finding various shoes I found cute and would consider wearing. Really, everyone, don't wait until your feet and knees start to hurt to wear comfortable shoes: start now so that you won't be as bad off later on. And, anyway, I like the look of this shoe--I consider it more vintage than old lady (and I am kind of an old lady in certain things, anyway). 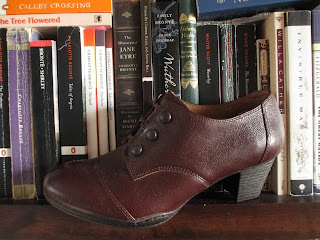 8) Huckleberry Jam & Creamed Honey - Old Town San Diego's candy store is one of my stops there: I like to get a few candies and some huckleberry products. The huckleberry caramels are good; the truffles don't interest me anymore. Last year I got a little jar of the jam and was planning to buy a bigger one this year until I saw the creamed honey. So I stuck with the small jam jar and added the honey, and I am so glad: the jam is good but the honey is very good. 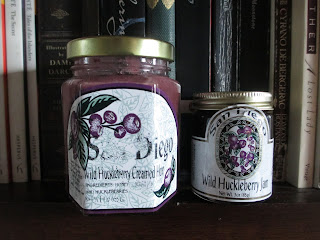 9) Oberon Design Barrette - I've been eyeing Oberon products for a little while now--do you see why? Such artistry in the design. I can wear this piece on a casual day or even a more formal day: it fits for any moment. 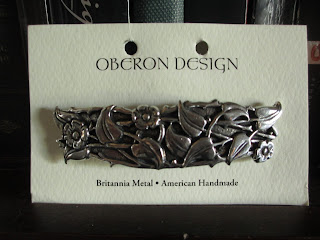 10) Dinosaur Bookmark - I also got a bookmark in San Diego. Now, I used to not like bookmarks: years ago I would use ribbons and then I went to thin slips of paper. Then I thought maybe I'd like to try a bookmark again, and then I saw this one, and once again, how could I resist? Years ago, I used to have a cat and a frog in this style; it's kind of nice to go back to the familiar shape. 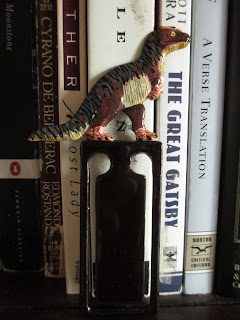 11) Herb Teas - In the Historic Old Town District, there is a sort of main museum store. Though the gift shop is small, I usually try and buy something just in support of the place. This time I picked up a book and the sampler bag of teas. They're grown (I believe) in the district and they're put together the way that people in the past would have made them. There are four flavors in the sampler bag: Lemon Verbena, Zesty Lemon, Ginger, and Chamomile. Though they're simple, they have some ingredients I don't expect to see in tea, like thyme. The effect of each blend is almost surprisingly nice; I've enjoyed drinking them while watering outside in the evening. 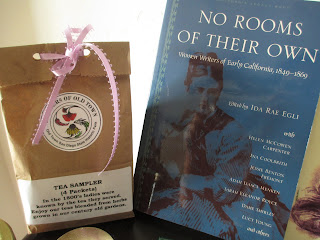