Of Land and Rain

When in the time of summer, it is sometimes nice to go off to the cooler zones--that is, to Flagstaff. I've always had mixed feelings about Flagstaff: while the blue and green, the mountains and the trees are beautiful in summer, I wouldn't want to live there because they get snow in winter. Snow is nice--but not having to deal with it every day.

In summer, though, Flagstaff feels so nice and cool compared with the more central regions of the state. I think the high temperature was about 80 or 81 this past weekend when I was there. And if you'd like even cooler weather, head up to the Snowbowl: in summer, the ski-lift operates as a scenic chair-lift up the San Francisco Peaks. 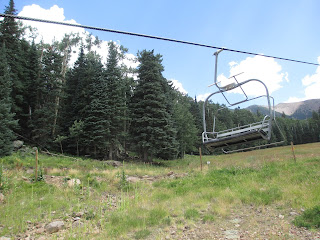 I think the temperature was around 70 at the base and another ten degrees less at the top. One of the only times you have to use a sweater (or jacket) during summer. It's about half hour up and then another half hour to go back down; you can go on some trails when you get to the top, or just look around and make your way back right away. 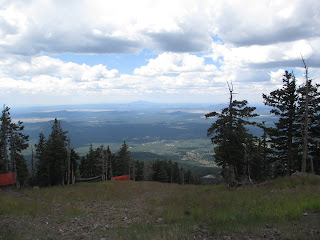 When you're at the top looking down, it's amazing how high you are: the Peaks are visible from quite far away, after all. So when you're on top of them, you can also see things far, far away: mountains and hills that are barely recognizable because of the distance. So much blue and green. 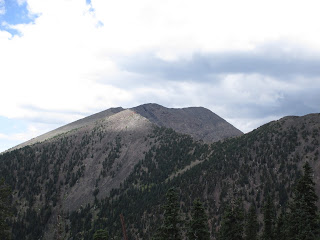 We made our way over in the morning to try and avoid afternoon rain--but what happened when we got to the top? We were watching the clouds, guessing about how long we had until the rain started while we waited in the (short) line to go back down. And it started raining on us. And then it hailed. And then suddenly the line behind us was much longer, most of the people deciding they would rather go straight back down than linger on top of the mountain so near to the clouds. The rain continued until we were, oh, about two-thirds of the way down. So perhaps I didn't continue looking out at the view as much--but the rain did make the ride much sillier.