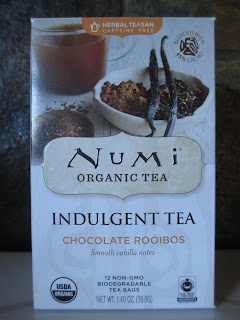 I've been slowly making my way through Numi's Indulgent Tea line, liking some of the offerings more than others. But I generally like Numi; as you can see, this tea is both organic and fair trade, meaning I can continue drinking it under my new resolution. (It was strange: I was staring at the teas at World Market when I had one of their $10 coupons and I realized that there were a couple of flavors there that I still kind of wanted to try but that I wouldn't be able to get anymore.) This tea blend, Chocolate Rooibos, is composed of cocoa powder, rooibos, honeybush, and vanilla beans. 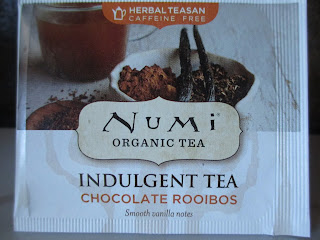 Rooibos and honeybush have been a pretty popular combo lately. While I enjoyed the Trader Joe's blend of the two, I think I'm starting to get my fill of rooibos. I think I can only handle it at all when paired with honeybush: it just doesn't appeal to me much on its own. And this tea is basically just another rooibos and honeybush blend. The vanilla softens it out to be almost sweeter and a little less rich. But despite being the first ingredient, I can't see that the cocoa powder does much at all. Especially after adding a little (almond) milk (which seems necessary to this type of tea), there's hardly any chocolate flavor, if any. It's more of an earthy taste that the cocoa powder gives than a chocolate taste. 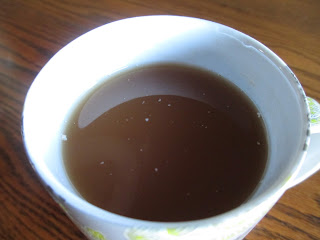 It's a pleasant tea with a hint at sweetness, but I don't think of it as a chocolate tea, which is disappointing because that's what the box promises. It doesn't really stand out to me on any other grounds, either, given the popularity of rooibos and honeybush blends lately. So while I've already finished off all but one of the dozen tea bags, I'm going to give this blend a general no: it just wasn't quite successful.

Posted by Deanna Skaggs at 7:42 PM