Tonight was a time of light and dark. I watched the moon rise from the horizon, bright and yellow, and then become slowly covered by shadow and turn reddish orange. And then I watched the season 5 premiere of Once Upon a Time and watched Emma slowly edge toward the dark. I have emerged thinking that the two, the moon and the episode, are one and the same. 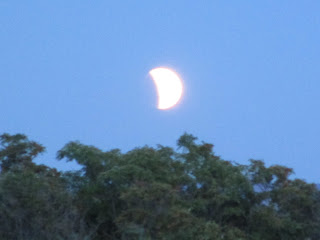 The moon was better than last year's because it was earlier and I was therefore able to see it (for the most part) from start to finish; last year I left while it was still red. But it seemed also not as good as last year's because I found it not quite as red--but maybe that's because I had already seen it before and so it was no longer a new effect. Either way, it's still a fascinating scene to watch, very beautiful. 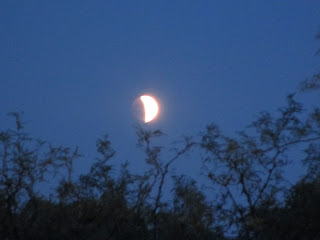 OUAT probably had one of its best season premiers: I had grown used to the idea that the first and last episodes of each season don't tend to be the best episodes. But I rather liked last season's final episode, and this first episode showed general promise. I wasn't expecting the link between the dagger and the King Arthur plot, and Emma's growth to darkness will be interesting to watch--though I was expecting a little more Swan Lake in this episode because of the title. The "we've lost our memories again" bit was a little too repetitive, though of course I know it's the plot again so that there can be flashbacks again. I just sometimes wish things didn't have to be so formulaic. Anyway, it should be entertaining to see slowly, episode by episode, how Emma turned dark. 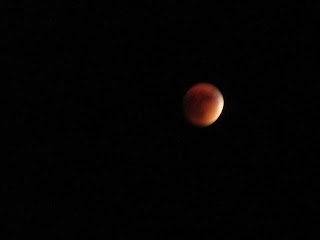 But you know, the thing about darkness (or general changes in color) is that they tend to sweep back away again. The moon gets covered in shadow, the shadow fades into red, the moon disappears entirely except for a little blur, and then the light reflects once more across the moon's surface. So it will be with Emma--it just might take a little while for her to get there.
Posted by Deanna Skaggs at 9:33 PM

Labels: blood moon, Once Upon a Time