Tarkin: the Man Behind the Empire

Sometimes it has seemed odd to me how much power Tarkin seems to have in A New Hope. Isn't Darth Vader, under the Emperor, the one who is in charge? And yet Tarkin seems to be calling a lot of the moves and exerting much of the authority; Leia even says that she "should have known he was the one holding Vader's leash." So how did he come to be in such a high position? 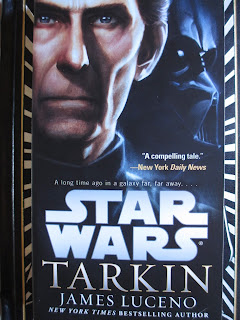 That's the question that James Luceno's Tarkin sets out to answer. Who is Tarkin, what's his background, how did his character form, and how did the Emperor and Vader come to give him so much authority?

I'm not as interested in the military or battle side of Star Wars, so when I was planning to read all of the new canon books, I almost thought about skipping this one. It kind of just seemed like a floating story about a character I wasn't really that interested in. But, you know, I'm glad I didn't skip it.

Tarkin's back story is worth the read; in fact, the flashbacks were my favorite parts of the book. A little creepy at times, perhaps, but that's how you get as ruthless a character as Tarkin, isn't it?

The plot has to do with the growth of the partnership between Tarkin and Vader as they chase down a group of saboteurs and try to figure out what their goal is. Along the way, you get a taste of just what the rebels of the OT were up against as they took a stand against the Empire. And you see why Leia reacted the way she did to Tarkin: he's the link between Vader and the Empire's subjects. The Emperor gives Vader the commands and then Tarkin figures out how to carry out all the little details. This is how the Empire became so strong.