The Heir to the Jedi Finds His Way

From the title, I somehow was thinking that this book too place after Episode VI, though I quickly learned that it is in fact between Episodes IV and V. I also had a sort of a shock when I read the first paragraph: this is the first Star Wars book I've read that's written in first person (Luke's perspective). I don't know why it should feel weird, but it did take me a moment to get used to. 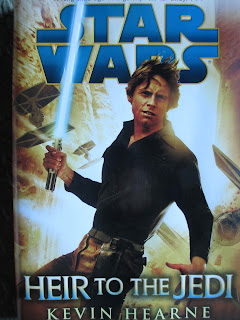 In fact, so did a certain something about the writing style combined with the content or technique. There's something just a tad familiar about the way certain passages are written that takes away from some of the fantasy aspect of the Star Wars universe. However, this is a mild complaint: otherwise, I rather enjoyed this book.

As compared with A New Dawn, reading this book everything felt more relevant, perhaps because I already know more about Luke than about Kanan--he's more familiar, as is his entire character arc. Though there are essentially three trips Luke makes in this book (each one a little longer and involving more steps than the one before it), what is really crucial are the little things he picks up along the way. He is learning about this new world he's stepped into and about the people in it and taking those observations and applying them to his attempts to learn more about the Force. They're small things he learns but significant things--and even small things are interesting to watch him learn. It reminds me of when I was still watching the original trilogy for the first few times, back before I'd seen it dozens of times--that newness.

I don't think this would be considered a spoiler. Nakari's character. I quickly realized that she would either die in the end or would turn out to be a traitor. And, um, the end of this book was sad; in fact, last night I watched the end of Season 5 of The Clone Wars and today I finished reading this book and overall I think it was just a tad too much Star Wars tragedy for me to handle all at once. Anyway. What I appreciated about how this book ended was how it set up reactions. The characters' reactions, I mean. Characters are faced with the choice of how to react to things. Anakin was faced with the possibility of death and he let his fear of death destroy him. But when Luke is faced with tragedy, he knows how to handle it. So there is the irony that Luke is seeking to become a Jedi like his father--but he will not make all of the same mistakes that his father did. And this in turn is what brings Anakin back from Darth Vader in the end.

Ah, lovely stuff. Anyway, this was my favorite of the three Star Wars books I've read so far after the novelizations. It drew me in quickly and kept my attention, despite my mild complaints about the style at times. May the Force be with us, even when we have no one else to tell us how to find it.

Posted by Deanna Skaggs at 8:29 PM