Did I Make Up Boyce Thompson Arboretum?

I am alive, burning alive. I'm writing at night when I get home from work. And I'm adventuring, exploring. This is why I don't understand the great desire people have to explore other countries: I still have so much to explore in my own state. (Not that I'm saying you shouldn't explore other countries, or that I would mind doing some of that traveling someday.) How many undiscovered corners are there, how many roads I've never driven, little museums I've never visited? 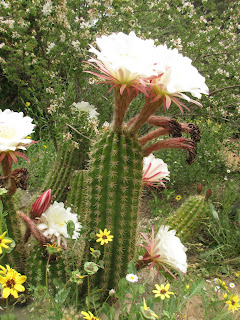 On one of these I went to Boyce Thompson Arboretum State Park. I had somehow never been there because it's almost an hour drive from where I am, enough to make me say, oh, I'll go some other time. When I finally did go, my, my, I certainly chose a beautiful day for it. The weather was perfect. Warm without being at all hot. A light breeze and cloud coverage helped maintain the temperature, too. Absolutely stunning day to be outside. 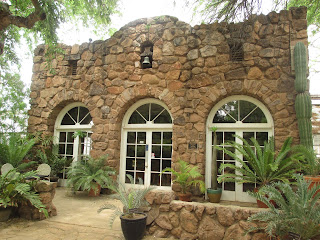 Driving to Boyce Thompson from the greater Phoenix area is like driving out to the Renaissance Festival--and then going on for another twenty or thirty minutes. Absolutely gorgeous land. That land over by the Superstition Mountains is wonderful. Keep driving a bit and it develops more. Bushy yellow flowers decorated the hills, which were themselves beautifully scabby pieces of volcanic nature. A multitude of textures and colors, not entirely unlike Black Canyon City (which is one of my favorite parts of the drive between Phoenix and the Verde Valley). 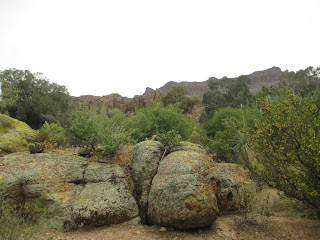 When I passed the sign that let me know I was entering the Tonto National Forest, I looked at the saguaros around me and laughed at there being saguaros in the forest. It was a moment of, I love Arizona, Arizona the land of so many different environments, which sometimes intersect and brush against one another with beautiful contrast. Then I rounded a corner and saw Picketpost Mountain and I fell in love. I declared my love to the mountain then and there. (I now lament seeing that the Picketpost trail is rated as difficult--that means I'll just be admiring the mountain from the road, at least for the foreseeable future.) 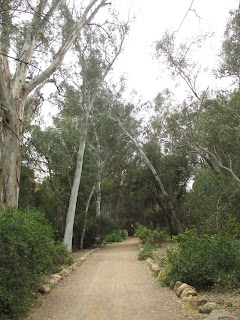 Given that I came to Boyce Thompson just after this, my declarations of love continued. Out loud, too, I might add. A weekday in May meant that I didn't encounter too many other people, so I was mainly by myself. So why not declare to the plants and the view how beautiful they were? 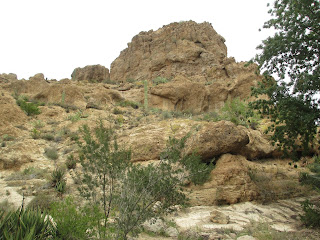 There is a main trail with little, windy trails that go off of it. Certainly there was more ground to cover than I'd been expecting. I spent close to three hours and could've easily spent longer except that I was running close to closing time (I'd thought a couple hours would be plenty). Everything is less "cultivated" than other arboretum spaces can tend to be. That is, there were more cultivated sections. The greenhouses, for instance. But the Chihuahuan Desert Exhibit? It was like walking out in wild nature, though with a path running through it. 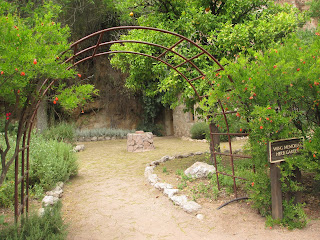 Then I turned another way and found myself surrounded by eucalyptus. Shady and lovely. I kept walking and came to the Clevenger House and I was in love again, like I'd just discovered a secret garden. All alone, I was suddenly at a house built into a volcanic hillside and surrounded by an herb garden; I thought my heart had created this place and my imagination was suddenly manifest physically around me. 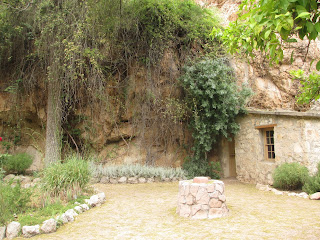 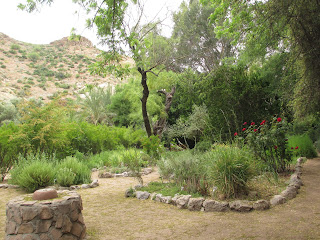 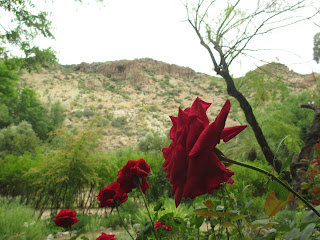 Then I saw the suspension bridge and said, I want to go on the bridge. I was looking at the gorgeous wash under the bridge and the rocky, hilly, voclanicness in the view--and then I stepped over two more steps and saw Picket Post House, which belonged to the garden's founder, William Boyce Thompson (he built the home in the 20's). I laughed because I had fallen in love with the place he fell in love with all those years ago--of course we both fell in love with it: it's amazing. Then I stepped up the High Trail, which winds up along the hill/mountainside. It's rocky with steep steps, so no flip flops or bad knees for this one. Probably not the best idea to walk alone, either, but I figured that my green dress would act as enough of a beacon if I stepped on a rattlesnake under a rock or something. I'm not a hiking alone person, so this was as close to hiking alone as I feel like I can go: I was completely alone, not another person in view, just the hills and the trees and the sky and the views. 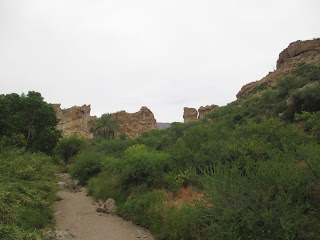 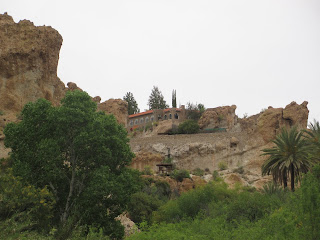 I've had a volcano obsession since I was six or seven (I used to fear them, even "extinct" ones, now I love their symbolic nature). So that's why I say I was in love with everything I saw; it was all me. 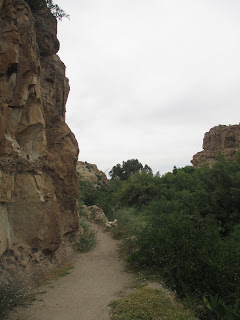 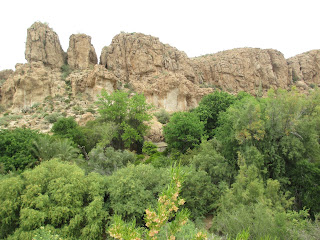 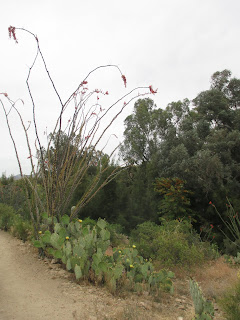 I went back around by the Drover's Wool Shed and the Cactus and Succulents Garden and the South American Desert Exhibit and then finally came around to Picket Post House from the other side. Lovely views once more and then the nice shady areas below the house. So many great places to sit at Boyce Thompson--and yet I didn't sit at all. 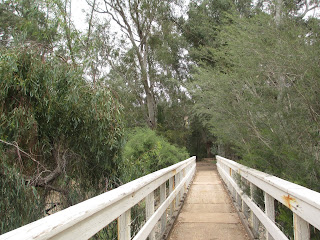 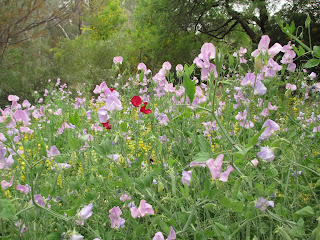 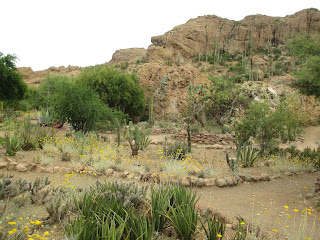 Now I'm wishing this park were a little closer to me. I could go there all the time. Certain more "northern" aspects of it like the trees and even the washes reminded me more of the Verde Valley, where I grew up--so it had that home feeling even while it had more of the deeper desert feel that I've come to feel akin with after living in the greater Phoenix area for years now. 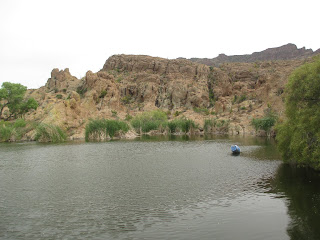 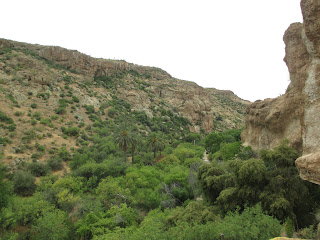 I would definitely recommend allowing plenty of time to explore and enjoy. For those who need to avoid the High Trail or even the steeper section of the main trail, there are still plenty of quiet paths. Just sitting under the eucalyptus and visiting the Clevenger House would be wonderful. A gorgeous park, with its combination of cultivation, wilderness, and history. 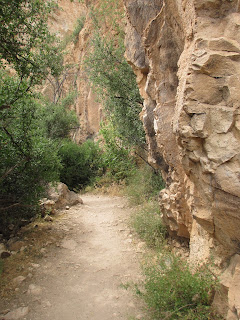 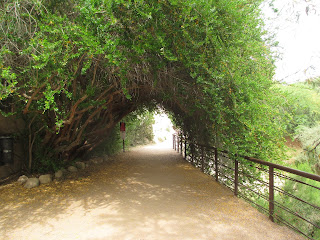 Posted by Deanna Skaggs at 8:55 AM