Well, you know I was just going to visit the Lost Dutchman Museum. I figured Lost Dutchman State Park would have to wait for another time, but I could go ahead and visit the museum. This was the closest I had been to the mountain that I usually only see from far off. It's an imagination-sparking piece, that's for certain. 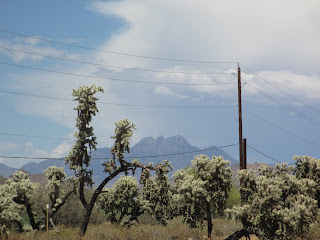 I went to the museum. It's basically a little room with lots of reading material and some collections of artifacts and antiques. In fact, there is enough reading material to fill quite a decent-sized museum, so I definitely recommend going ahead and reading as much as you can while you're there. History about the area, some geology, stories from various Native American tribes about the Superstition Mountains, and stories of all the searches for the Lost Dutchman Mine (they all end tragically, just adding to the "superstition" of it all). Outside, you can visit the church and a couple of other buildings left from the old movie filming location. When the weather is nice, they do have other events and things going on outside. Mainly, though, it's just a nice little spot to visit. Lots of books in their gift shop (a fact they even advertise on their website--and it is true). 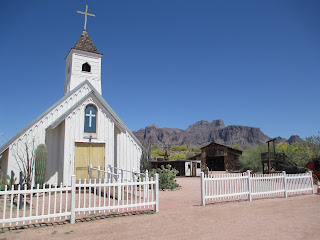 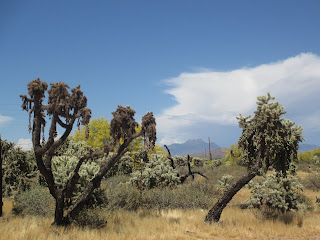 It was a nice visit, but I am, as I mentioned earlier this week, so burning alive right now that I couldn't stop there. I was like an addict, like, I can't just sit here and drool at this awesome volcanic thing jutting from the earth and then turn around and be home in half hour. I need more. So I thought, well, maybe I can drive up a little bit more, just to get a taste. But then, you know, I was looking at the map and thinking of all those stories of the people who walked all over this land looking for that mine and I thought, I want to see it all, so why don't I just make the circle around and then go by way of Globe and Superior back to Apache Junction and then back home? (For those unfamiliar with the area, this route starts Southeast of the Phoenix area, continues east and north and then goes back south and west again. A true circle. It is Arizona's first historic highway, the Apache Trail.) 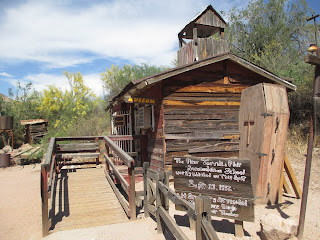 Twists and winding shapes brought me to Canyon Lake, this beautiful body of water surrounded by cliffs. Picturesque, yes, especially after driving through volcanic, crusty, rocky desert (beautiful volcanic, crusty, rocky desert, yes, but quite a contrast to a body of water). That brings you pretty soon to Tortilla Flat, which is a gift shop, a restaurant, an ice cream shop, and a (literally) walk-in-closet-sized museum. A place to stop and take pictures and look at the view. 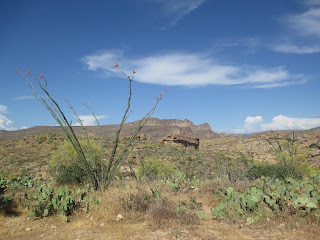 I kept going and where there had been other cars, suddenly there were done. Where there was pavement, suddenly there was none. When the pavement ended, so did my normality. I got out of the car, just randomly on the side of the road because there was no one there, so why not? Oh, all the rocks and plants, all the colors and textures, they were at their height, more beautiful than anything. My soul stretched across the land and I declared my love for the beautiful of it all. 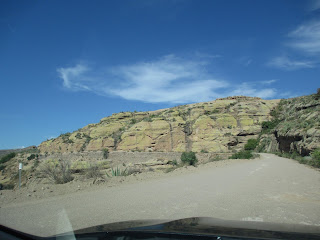 I got back in the car and kept going. Now, um, I may have not quite realized that the whole unpaved thing was coming until I saw it on the signs. I could have turned around, but it was all too much fun--even getting more than I'd realized I'd been getting myself into was fun. An unpaved, steep road through canyons means driving at fifteen miles per hour. And forty miles of road means, well, I'll let you do the math. The simple fact: longer than I'd expected. I drove more that day than I've ever driven in one go before, so it was kind of exhausting. But completely worth it. 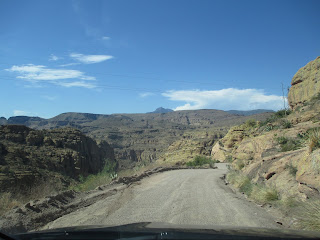 All of the winding quality meant that there were gorgeous views around every corner (and there were lots of corners). It was like adventuring and exploring without getting out and walking. It was almost like off-roading (can you tell I never go off-roading?). The road is so old and so steep and windy that many sections are also one lane. So, you know, if you do meet someone coming in the opposite direction, you both must be careful. And given all of the turns, you have to be extra slow and careful at every turn. But everyone knows this and there weren't too many other cars, so it was all fine. Do, though, make sure you only make this drive with a car that's in good condition and with plenty of water (other supplies are always good to have, too, just in case). Even if your car is fine, you could end up stuck behind someone else whose car breaks down. It's the desert and kind of far from aid, so just be careful. 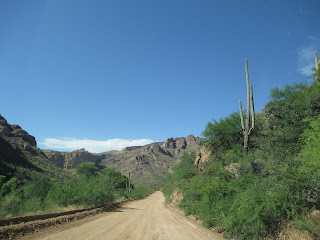 Knowing all of this just made me enjoy the drive all the more, though. I had music on and I was making loud declarations of all sorts there in my car. A wonderful time for self-reflection. 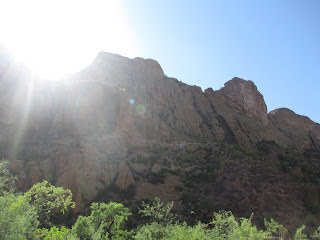 By the time I passed the sign mentioning that there were ten more miles to the 188, I was getting exhausted from driving on all those curves. So the lookout point over Theodore Roosevelt Lake and above the dam was a welcome stop. After climbing those cliffs and seeing the river flowing through, it was like a reward up on top to find another huge body of water, this time with the crazy bridge running over it. This water was much bigger than the first--and also more open-feeling because it was above the cliffs instead of in their midst. 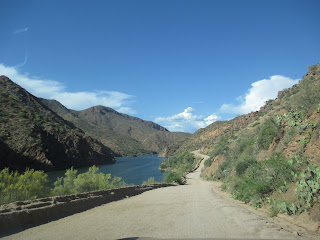 I've never been so excited to see pavement, too, I might add. 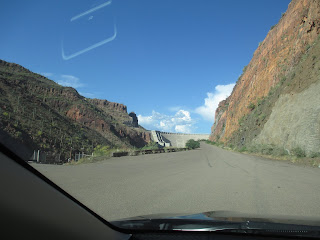 After this, the drive felt more like civilization. Technically this other half of the circle is still part of the Apache Trail, but mainly people use that name to describe that unpaved stretch. The second half was more just a usual, scenic drive. Great views of the mountains. A swing by Globe and a drift through Miami (this little town really caught my eye; I want to learn more about the history of it), then on through to Superior. Rocks and a tunnel and then back through past Boyce Thompson Arboretum, which I talked about on Monday. It was nice to be back in that newly familiar territory I'd so enjoyed about a week earlier. Then back to the city. 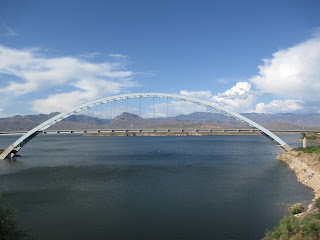 A scenic road trip through nature and history. A touch of the past, a touch of the trail. A full immersion into thrilling isolation. That was a fantastic unplanned trip of mine. 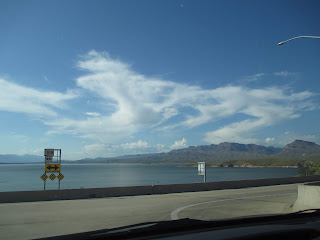 Posted by Deanna Skaggs at 9:24 AM