While I'm not entirely sure if this bar from Wild Ophelia is new, it was new to me, so I snatched it up, along with another that I'll probably get to next week. And then I kept looking at it and it kept looking at me and I said, haven't we met before? It seemed so familiar, as did the bar for next week. But no, turns out I've reviewed neither of them. 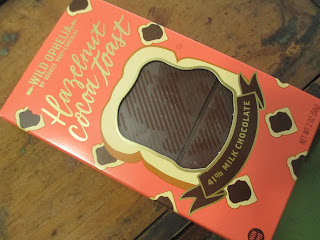 Maybe it's just the concept that sounds so familiar. Hazelnut and chocolate are a standard flavor combination, though a lovely one, as well. And the name Hazelnut Cocoa Toast is reminiscent of Theo's Bread and Chocolate, which I reviewed, oh, probably eight to ten years ago. The card box's design is simple and fun. It has that cutesy/trendy side to it that makes it very young and Instagram-y looking; maybe that's why, while I like the look, I'm also feeling a slight disconnect from it.

Once you open the packaging, the chocolate comes out with a great, fudge aroma--or perhaps it's more like fudge spread specifically. You'll want to chew this chocolate a little because it has teeny little crisped "bread" pieces in it to represent the toast. They're fun, with a texture slightly similar to crisped rice--or maybe more like itty pieces of wafer. That would in fact be the better comparison given that the ingredients lists them as "crushed crepes dentelles biscuits." They do in fact give just the right texture to the chocolate without detracting from or overwhelming the other elements; they just make it fun. 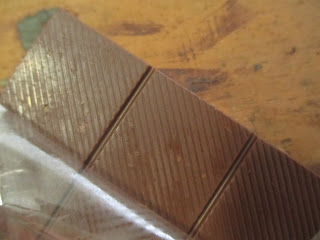 Obviously, of course, we have the welcome hazelnut flavor going on, though it comes along with more chocolate flavor than you would normally find in spreads. This is, after all, the fairly high cocoa content (for milk chocolate) of 41% and Wild Ophelia also has decent quality chocolate, so of course you'll find some better chocolate flavor in here than in a cheap spread (I like chocolate hazelnut spread, but as I've said before, not Nutella because Nutella is just oil).

Let's get back to the bread for a moment. The toasty biscuit pieces bring with them a touch of salt and almost a butter flavor, which help to bring even more of a feeling of toast. It's quite a nice effect. I wish I had Theo's Bread and Chocolate to provide a comparison of the two--though I suppose that isn't really necessary. I enjoyed that bar and I'm enjoying this one, so that's sufficient.

While some of Wild Ophelia's flavor combinations can sound more fun to try than they actually end up being to eat, this one is great fun both ways. A little new and different but mainly familiar--all brought together in a way that is very much for munching.
Posted by Deanna Skaggs at 7:53 PM