When Theo came out with new flavors a couple of years back (or some amount of time like that), the others sounded great. Cinnamon Horchata? Lovely. Root Beer Barrel? Fun. But Grapefruit Ginger? No, no, that one did not appeal to me. So I'd been avoiding it; I figured I didn't need to even try it. But then I thought, why not? Sometimes it helps keep you on your toes to try flavors you don't mesh with as well--and it probably also helps readers to hear me talk about products that I don't like as much. This way you know I'm saying the truth when I do speak well of something. Add to all this that it's also interesting in its own way to talk about a flavor set that you know going in isn't your personal preference. 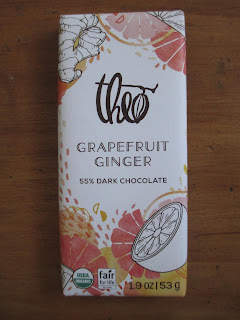 The same fun yet somehow also slightly muted style decorates the packaging and the usual plain style marks the chocolate inside. Said chocolate smells of dark milk chocolate and grapefruit and just a small hint of ginger. I'm not a citrus chocolate person and I while I don't mind ginger mixed in with other spices (like in chai or gingerbread cookies), I'm not overly fond of ginger on its own. The scents were fine, though, because I was just picking up these different elements and not necessarily tasting them as one combined flavor. That part would come next.

I broke off a piece to let it melt in my mouth. As it began melting, I got the citrus, though it didn't taste specifically like grapefruit to me, just citrus. Then I found a crystal in there, a ginger crystal. I hadn't been expecting the ginger to be in pieces like that. So letting the chocolate melt means that you're left with a piece of ginger in your mouth after the chocolate's gone. They're small pieces, but still--if crystallized ginger isn't your favorite thing (it is pretty strong, after all), then this isn't ideal. Even a small piece can deliver more of a hit than is necessarily desirable to some of us. 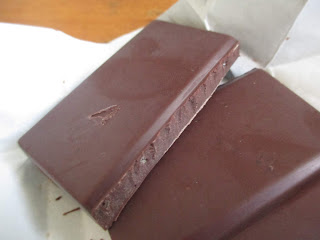 So maybe chewing would be better? Yes, definitely. In this way, I tasted the chocolate more and I tasted the grapefruit more later into the bite. Possibly the reason for this last part was that I already had ginger in my mouth so it masked the initial citrus hit--or possibly it was because the citrus takes a second to come (once the chocolate has melted to a certain degree), so that moment just felt like it came later since I'd started tasting the chocolate as soon as I started chewing (that is, before it started melting).

The chewing is definitely my preferred way. I like getting more chocolate flavor and less citrus flavor, and I prefer not to get that hit of just ginger. The chocolate is much as I'd described based on the aroma. It has a 55% cocoa content, so it's darker than milk chocolate but not quite fully dark chocolate, either. I would say that the proportions of all of the flavors seem about right. The fact that I can eat this chocolate is something, I suppose, given that the flavor themselves aren't within my personal preferences. While this chocolate wasn't enough to win me over to citrus chocolate, it gets points for being acceptable and even somewhat pleasant. It does, after all, feel wonderfully light and springy.
Posted by Deanna Skaggs at 6:52 PM