An E.K. Johnston book followed by a Claudia Gray book? Star Wars fans are getting spoiled, eh? Probably everyone's looking forward to the next Thrawn book coming up next, but I tend to like books like these more than the Thrawn ones (though he is a cool character). 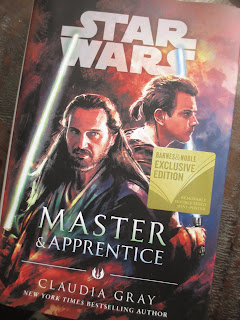 While that relationship is the core part of this book, the plot is nice, too. Instead of the plot being the aside, this plot was entertaining in its own right to follow along with. It shows what the Jedi were up to during typical (or atypical) assignments of "guarding peace in the galaxy." So we have a bit of a political situation, a bit of mystery, and a bit of adventure. Along the way, we also get to explore questions of government versus personal decisions/roles, ethics, and morals. There are some lovely quotes about light and dark, too (I love the light and dark, as you know).

While the plot is a separate piece of its own, it does also help set up future events that we know are coming. We know that in a few years, Qui-Gon will encounter a boy he is convinced is the Chosen One from the prophecies. So this book talks about his attitude toward the prophecies over the years--and Dooku's and Obi-Wan's attitudes, as well. You see the gray area prophecies can create. And within all of the talk about prophecies, dare I say, is a bit of a tease about the sequel trilogy era. Kylo, too, looks at the past, as does Snoke--and they just released that teaser trailer with the Emperor's laugh. So we're all kind of thinking about how the past, present, and future relate. Reminds me of how some people say that Kylo is in fact the Chosen One, not Anakin, because Kylo is made up of equal parts of the dark and light sides of the Force (which is why he's always at war within himself--and it's that tense, unstable breaking point in him that Snoke encourages with the idea that it strengthens him).

Anyway. Back to Qui-Gon and Obi-Wan. As I mentioned, their relationship is the core part of this story. Like Obi-Wan and Anakin, they're not necessarily a perfect match; they clash in many ways. So it took going through many rough spots to form their bond. Without going over all of the details in which this manifested itself, I'll just say that I vastly appreciate a book having such a strong emphasis simply on the relationship between two characters. It's all about the characters for me, after all--and that is the core of Star Wars, as well. And while I like a good love story as much as the next person, I also like other relationships than romantic ones to get their due in the spotlight. Claudia Gray, I might also mention, was the perfect author for this book. She can write out the political situation just as well as she can write out those character relationships. This was one of my favorite Star Wars reads.
Posted by Deanna Skaggs at 10:48 AM