The first time I looked at Woodblock Chocolate, it was with their 70% Dark Chocolate. Now I'm returning with their Salt & Nibs, which appears to use the same 70% chocolate as the base. We have the same 25 gram mini bar again, this time decked out in blue with polka dots instead of the vintage roses against the cream background. The blue is nice, though I am personally partial to the roses. The wood-inspired chocolate mold is the same again, as well. 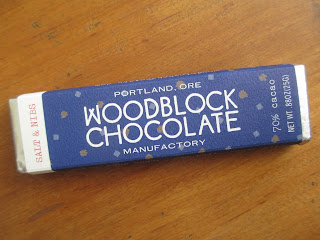 This time, though, flipping over the chocolate bar reveals the nibs and even some visible chunks of salt. Usually the better option when you have a flavor-packed side of a chocolate is to place that side against your tongue. But I opted for the smooth side first--and I mainly just got the chocolate. Not really any nibs or salt. A little bit of the nibs towards the end, but they really didn't distinguish themselves much from the chocolate even then. 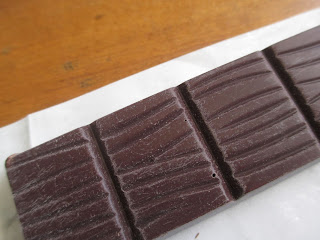 So, nibs and salt side down, then. In this way, you do get to feel the different texture when the chocolate initially hits your tongue. But again, I still didn't get that unique crunch that nibs have. They just kind of seemed to disappear. I didn't get too much more salt this way, either. Each bite can be different for a chocolate like this, so I did get a little bit more salt and texture on the third piece. Still not a lot, though. 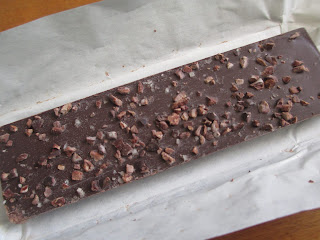 The salt and nibs do add more of a casual sense to the bar as a whole, more of almost a candy bar sense except that it of course doesn't taste anything like a candy bar. As covered before, the chocolate is quite good. It's semisweet chocolate that isn't at all bitter. So this bar offers general chocolate flavor and a hint of salt and a hint of texture.
Posted by Deanna Skaggs at 6:48 PM