Care to Travel to Batuu?

While I don't necessarily read a lot of travel guides (or any?), I do like to read about local history and the stories and factoids about places. Galaxy's Edge (or Black Spire Outpost on the planet of Batuu) in Disneyland (or WDW, if you're East Coast) I have described as being something like the Petrified Forest (for the petrified wood and the magical quality) and Santa Fe (for the little-town-to-wander-through feeling). It is a real place in my mind. I mean, it is physically a real place. But it's so easy to by into the fantasy of it, to believe that you are truly at Black Spire Outpost on the planet of Batuu. 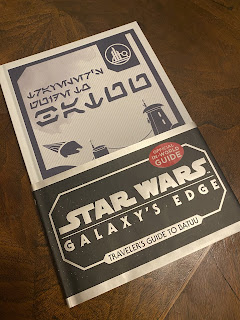 So if I like reading books about places and I like Batuu, then how about an in-universe guide book to the planet? The Traveler's Guide to Batuu is labeled as being written by Eloc Throno (in our world, it's actually written by Cole Horton), and the title is in both our alphabet and Aurebesh. While the look of the book is cool, I wasn't immediately in. I didn't feel like I needed a list of the menu at Oga's Cantina or the shops in the Marketplace. I already know those things and can view them at the Disneyland website/app. I'm quite glad that I went for it despite my misgivings, though. 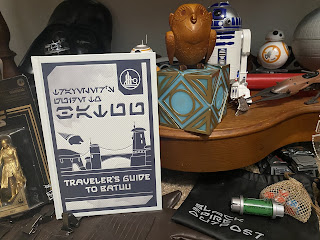 This book isn't as contrived as I had anticipated. Yes, it lists drinks at Oga's and food at Docking Bay 7. And many of us already know some of the Easter egg backstories that this book explains. Things like the Wishing Tree or the blaster marks in Oga's from Thrawn. But there were some new things in here, too. More backstories in the merchants, for instance--even an explanation of why the cool woodcarving vendor at the end of the Marketplace is never open. So for the new tidbits and even for the ones we had already heard, it was fun to hear these backstories told in the same style that they would be in a guidebook. Not only does it make for a handy trivia guide so you can easily remember facts to share with your friends next time you're all in Batuu together, it also just adds to the feeling of this being a real place.

As I read, I felt like I was walking among the spires again. Things that the author describes I could recall seeing--or sometimes wonder why I hadn't paid much attention to them before. I kept revisiting it all. Black Spire Outpost is beautiful and full of detail. This book celebrates all that. It does take a couple too many tangents to describe ships and the First Order and things like that that we already have plenty of info about in the movie visual guides. I could have done without that content; it seemed like it was only there to bulk out the book. Otherwise, though, I had great fun, and would recommend this little piece for fellow fans of Black Spire Outpost.

May the spires keep you.

Posted by Deanna Skaggs at 8:59 AM