Winding up my trio of Halloween chocolate candies is a set that is not specifically Halloween but simply fall-themed. Ghirardelli squares are a sturdy standby for any time of year, and usually any seasonal approach that Ghirardelli does is light. There are three flavors in here, two which are standard (Caramel and Fudge Caramel) and only one seasonal (Pumpkin Spice Caramel). Pumpkin Spice can of course take you all the way from September through November. 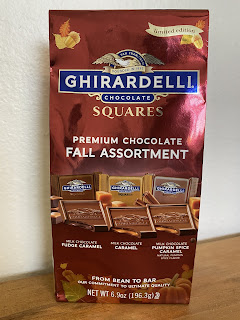 On one hand, this would also seem not to be a Halloween bag because who would want to give away Ghirardelli squares or even put them in your Halloween candy bowl--they're too expensive, right? But they fall right in between the prices of the other two. So yes, this is more expensive than a bag of KitKats, but still at a standard price for its genre, shall we say. If you use the Nutrition Facts to estimate, there should be 14 squares in here, which would be 34 cents each; again, I don't know if I somehow miscounted out of daftness, but I only counted 13, which would be 36 each (I paid about $4.79 for the bag). So if you're doing maybe a mini trick-or-treating event just for your family or keeping them in your candy bowl, the price isn't unreasonable. 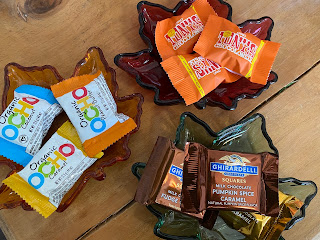 This is the least decorated bag of the three. A rich brown color and some leaves, pumpkins, and acorns in the corners make up the whole of the theming, and there is nothing on the individual wrappers. While this is consistent with Ghirardelli's usual style, I do wish they had at least decorated the Pumpkin Spice Caramel wrappers differently. Maybe a couple pumpkins on there? Or at least a different color to distinguish them from the Fudge Caramels. 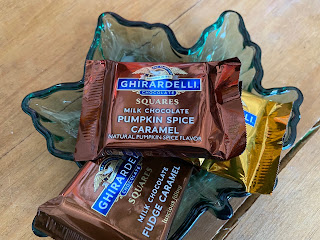 Those Fudge Caramels were the ones I started with. It's milk chocolate filled with caramel that tastes more strongly of vanilla than you might normally get in a caramel. It's a sweet, confection treat. The plain Caramel has more of a standard caramel flavor. Ghirardelli's caramel is soft but also not quite free-flowing or liquid; it's a nice balance between the two approaches. It's good, I say with a shrug. 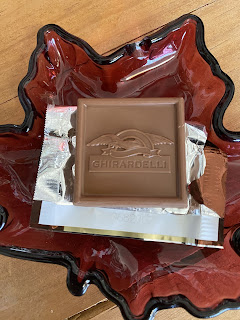 What we're really all here for is the Pumpkin Spice Caramel. If they weren't going to do other fall flavors, as well (maybe apple cider), they could have just made the whole bag Pumpkin Spice. That's what people are after, anyway. That is, I'm after it because it's the seasonal flavor. Normally I'm not too much into the pumpkin spice craze. 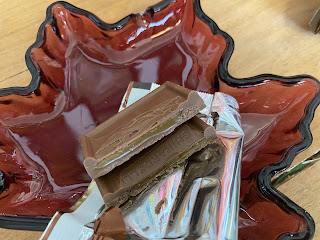 There is already a pumpkin spice aroma even before biting in. When you do, you'll find a caramel base pretty much the same as the regular one, except that is infused with that distinctive pumpkin spice flavor. I taste cloves and cinnamon and ginger and maybe cardamom--the usual suspects. It's nice. As I've alluded to before, these are some of the same pieces you would use for chai tea and I do much enjoy a good chai. It's all nice and warm and sweet. In fact, the sweetness of the milk chocolate helps to ground the spices in the way that sugar and milk would in a chai latte. The caramel makes for a good base, as well.

While pumpkin spice by definition does not necessitate the inclusion of pumpkin, there is something of a taste in here of what comes across to me as artificial pumpkin flavor--whether or not that is what it actually is. If you are one with the pumpkin spice, this might just taste like fresh pumpkin pie to you. To me, it's just a little off. So we have another of those instances where you'll know best if this chocolate is for you. It's a nice approach to pumpkin spice; I'm enjoying it. But if someone had a candy bowl of these three flavors, I'd probably choose one of the other caramels and leave the pumpkin for others. Not a disappointment; just a preference. The disappointment here is that there is only one fall flavor in this assortment, but it is otherwise a pleasant bag of chocolates.

Posted by Deanna Skaggs at 9:46 AM