These Is my Words

When I bought Nancy E. Turner's These Is my Words at an antique store a while back, I thought maybe I had read the book in middle school or something. It seemed like the type of thing I would have reached for. Certainly, at least, the name and cover felt familiar to me. On finally reading it, I find that no, I have never read this book before--but it is certainly one with which to be familiar. When I read Vanished Arizona from Martha Summerhayes, I felt like that was something for every Arizonan to read. The same goes for this book. 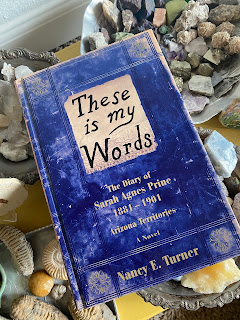 They are somewhat similar and yet completely different. While Sarah Agnes Prine was a real person and Nancy E. Turner based her character on what she knew of her great grandmother, this book is fiction. As I read, I wondered how much was based on fact--a quick Internet look afterwards shows that most of it is indeed fiction (except for historical things like the army's activity--this is still a well-researched book, even if it is fiction). But it reads very real, so real that it could be and so that is therefore quite reflective of real people's lives in the Arizona Territory.

Martha Summerhayes was an outsider who spent some time living in Arizona as an army wife. Her book is a great read and I do recommend it. But Sarah Prine grew up in the West and lived her whole life in its harsh landscape. When I say I love Arizona today, I am well aware of the fact that the Arizona that exists today is nothing like what it was 140 years ago and who I am today would probably not have been at all able to live in that setting. This book is full of love for the place: Sarah made a home and made friends and family and held onto hard work and hope and love. So even when potential opportunities came to leave, she did not want to.

What makes Sarah's love for her home even more real, though, is her portrayal of its negative side, as well. Although she has a touch exterior, she is internally terrified of attacks, whether Native American raids or from outlaws. She is a good worker and willing to do whatever is necessary, but she tires from the physical labor and she wishes for pearls and velvet. She sweeps snakes off of her porch with nary a thought, then weeps to save her daughter from a rattler. Her love of her home is like her love of her husband: she declares her hatred of him as often as her love. She is passionate and honest--and even though she has emerged as a remarkable person, you can also see her brokenness from growing up under such harsh circumstances.

While the journal style can be reminiscent of the Dear America books (which are targeted at what, 9 to 12 year olds?) just as much as real memoirs and the 1800's setting of Little House on the Prairie, this is decidedly a book for adults. It is much more graphic than either of those series. Attacks (using any definition of the word) happen and injuries happen (it also has more adult love content, though probably less than the average YA book has). It's quite a heartbreaking book, in fact. And yet it's interesting. Sarah Prine is someone who aims only to live her life--and she knows that other people around her are doing the same. So she is just as sad to know of the Native American camp that was attacked as to know of her own wagon train. And when she is in communities with people, she responds to behavior rather than prejudice. She befriends the Chinese family in the wagon train and helps teach them English, she becomes like family to her Mexican neighbors and learns Spanish and recipes from them, and she is the only army wife to host the Yavapai scout. In contrast, she is turned off by the behavior of the snobby ladies on the train, and is exasperated at her brother's wife who proves herself to be rude rather than dainty (and from whom Sarah must defend her friends). So there is sadness in here, but hope, too.

And you know, the love story is nice, too. We all like a good love story.

This book is an interesting story to read because of its historical portrayals. But it is equally moving to read because it is a portrayal of life lived. There are such strong emotions in here. We might all be thinking of different events in our own lives when we are moved by things in Sarah's life, but I think everyone will be touched emotionally. It is a heartbreaking book, and one of the best books I have read.