When I set down a book I'm reading, I always place it face down. It isn't that I'm trying to hide what I'm reading; it's just a habit. But most habits have a beginning, whether they are learned or cultivated behavior. This particular habit of mine started in sixth grade, at the age when I was becoming more self-conscious about what books I had chosen to read versus simply whatever I happened to find in the school library. Specifically, the habit began with Neal Shusterman's Downsiders. 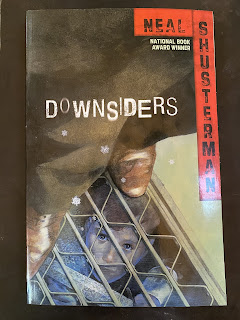 I have long wanted to reread this book because I liked it so much at eleven years old. It's a curious thing to reread a childhood book. I only read it once, but it really captured my imagination and stayed with me. I remembered so many specific things from it. While at this point in my life, I was pretty steadily getting into the nineteenth century (Little House on the Prairie took up fifth grade, by sixth I was moving into Anne of Green Gables, and by seventh I was thick in Charles Dickens and the Brontes), Downsiders is set in present day New York. The Downside is a fictional underground civilization, and the book centers around an encounter of a Downsider with a Topsider. It isn't dystopia. It isn't fantasy. It isn't sci-fi. It isn't mystery. It isn't thriller. And I guess that's why I liked it, why I say it captured my imagination. But because it looked a little different from the Victorian books I was accustomed to reading, I felt more comfortable turning the book upside down instead of leaving its cover face up.

This book described strange and interesting settings, so wonderful to a young and curious mind. It also describes characters struggling to find their places within their communities, so relevant to a young person. The exploration of Topside versus Downside and the history of the Downside that Talon and Lindsay uncover is simply an illustration for those feelings of not having a place in the world--and of realizing that finding that place is really about deciding what place you will have.

Certainly, there are things in our lives we cannot control. But our philosophy and our beliefs about who we are and what we choose to hold onto and what we choose to hope for, well, that's the part that we have say about. When I was eleven, I really liked this book because it was exciting and different. Close to two decades later, I still liked rereading it because it gave me much to think about as far as personal identity and community identity and the interrelations between the two.

Posted by Deanna Skaggs at 4:52 PM