Fall is in the air, isn't it? And with it comes a transitioning of outdoor space. Depending on where you live, this time of year means spending either less or more time outdoors. Either it is finally cool enough to be out or just out to be too cold. Either way, we are on the cusp. Just the time for a chocolate that reflects on time spent outdoors. Maybe it's a summertime camping trip or an autumnal bonfire that most conjures up for you toasted marshmallows and s'mores. Whether you're at the end or the beginning of your own s'more season, today's Oh My S'mores bar from Chuao celebrates the nostalgia. 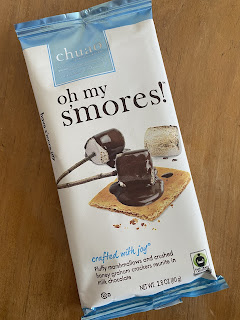 The images of marshmallows and dripping chocolate and graham crackers don't overpromise: there are in fact whole marshmallows, albeit mini ones, to accompany the graham cracker pieces. So the aroma when you break the seal is quite welcoming: rich confection milk chocolate and deep vanilla. The mini marshmallows are visible scattered on the back of the bar, while various adjectives and exclamations decorate the squares on the front. Really, though, I can't see breaking this one into squares: it's meant for biting into. 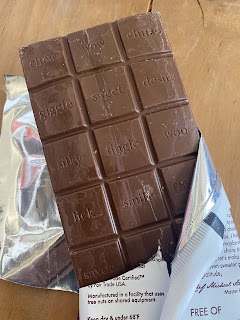 The graham crackers are so plenteous in the chocolate that they create a texture that is rough and crumbly rather than the smoothness that chocolate normally has. They are finely ground, small pieces. So the rough texture is pleasant, bringing to mind eating an especially chocolatey cookie. It's all rather saltier than I would have expected (that is, I wasn't expecting any saltiness at all), but that isn't necessarily a bad thing. It is also not as sweet as I had expected. 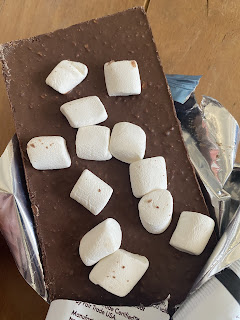 Partly that would be because this is 41% milk chocolate, so it's nice and steady and not overly greasy or milky or . . . sweet. I buy Chauo infrequently enough that I can never immediately call to mind what either their standard milk or dark chocolate tastes like. This milk chocolate is quite pleasant (this also reminds me that when I had Chauo milk chocolate hot chocolate versus dark I preferred the milk chocolate).

With the marshmallows, you get the sweet, familiar flavor along with some softer texture. For such big blobs (in comparison to the thickness of a chocolate bar), they blend in surprisingly well. I thought that they might stand out as an awkward garnish or that it would simply feel like eating marshmallows rather than eating chocolate with marshmallows in it. The effect was the latter, though: the three elements of marshmallow, chocolate, and graham cracker are all in balance. Granted, of course, how much marshmallow you get will vary with each bite since they're centered and slightly away from the edges. But that's just encouragement to take bigger bites, eh?

And that sums it up, I suppose. This is a casual, fun, nostalgic bar of chocolate. It's nicely done and the ingredients are of enough quality that it passes my test. So I recommend it for the times when you haven't lost control over your taste buds but you do need a sweet chocolate to tear into--perhaps now?

Posted by Deanna Skaggs at 4:53 PM