I regret to inform you that I have only had a pumpkin spice latte once. It was several years ago. I was meeting a friend at Starbucks. Being that I don't really go there much, I thought, oh, I'll just get that, people like those (this was before the psl craze was as big as it is today, but still it was around). The first sip scared me and I tried, I did try, but I couldn't drink probably even a third of it. It just tasted like weird-tasting, artificial fright to me. Sacrilege, I know. 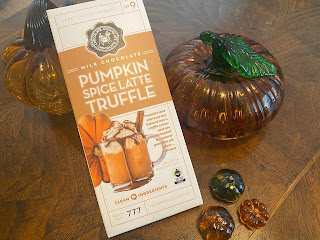 So it was perhaps funny that I jumped on the Pumpkin Spice Latte Truffle bar from the Chocolate Chocolate Chocolate Company (hey, this is the third time I've reviewed this company with the trio of chocolates in its name, fancy that). But as I mentioned with the Halloween candy, I do get excited for seasonal chocolate products to review, considering that there are generally so few (or companies might put out the same thing every year, which is fine but doesn't give me anything new to review). It was for sale at Michael's, by the way, and I haven't seen it anywhere else. 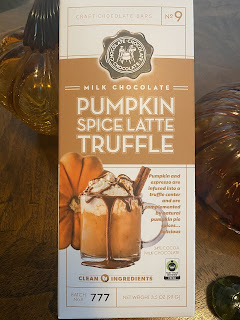 I'm sounding like a broken record, but I somehow managed to melt this chocolate bar, too, so that's why there is no picture of it. Probably a safe guess that it would have looked the same as CCCC's other two bars did, though. This time I can solidly way that I'm favoring the packaging. The solid white base with the fall-colored band and the pumpkin and dripping latte hit that heartwarming, comforting vibe. While I may not go for the pumpkin spice lattes, I do often put a fall twist on some hot chocolate at home. (I've said it many times, but here's my hot chocolate recipe: 3/4-1 cup milk/non-milk, 1-2 tsp. cocoa powder, 1 tsp. honey/sugar, and as you wish also include cinnamon, ginger, turmeric, cardamom, mint, rose, or whatever else you feel like adding at the moment.)

Back to the chocolate bar. The label says that "pumpkin and espresso are infused into a truffle center and are complemented by natural pumpkin pie spices." The truffle center is pretty much akin to the caramel that was in the Waffle Cone Caramel bar. So that makes this is a fairly similar piece to the Pumpkin Spice Caramel from Ghirardelli. I melted this bar so strangely that almost the entire top four squares melted down over the bottom four squares; this has never happened to me before. I suppose it must have been upright in my purse and it melted there in such fashion. I almost wanted to include a picture just because it was so ridiculous. So my perception of thickness and such is going to be a little off--but that's why I'm glad I've had a caramel chocolate bar from this company before. All indications seem to be that the physical aspect of this one was basically the same as in the Waffle Cone Caramel. 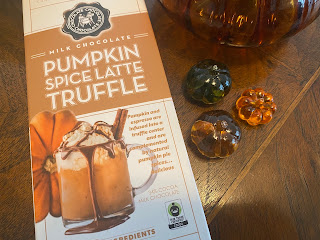 Biting in quickly brings up the familiar spices. Sometimes I imagined more cinnamon and ginger in here than in Ghirardelli's take, but I'm not entirely sure. Again, it's a little hard to tell proportions because of the melting, but there seems to be more pumpkin spice flavor in general here than with Ghirardelli. Possibly more of a pumpkin flavor, too. (Among the ingredients are coffee extract, pumpkin, cinnamon, allspices, nutmeg, ginger, mace, and cloves.) The inclusion of espresso is different, but for once what is normally a strong flavor fades into the background of all the fall spices. Sometimes I taste it; other times I forget it's there. This is fairly accurate for a pumpkin spice latte, though, right? There are so many flavors that coffee doesn't come into the foreground.

The caramel is a little thicker than Ghirardelli's, but it's fine, also. It adds sweetness and texture. While Ghirardelli's milk chocolate is also very sweet, I do prefer it to this one. (Once more, the ingredients list both milk chocolate and white chocolate--maybe if they just went for a full milk chocolate instead of a blend that would be better?) That's the biggest difference between these two interpretations for me. I may very well like the approach to the spices more here, but I prefer Ghirardelli's chocolate. So it's difficult to compare them. I guess the gist of it is, if you enjoy fall flavors and pumpkin spice, they're both worth buying. I think I do get less of that weird, somewhat artificial taste that normally bothers me with pumpkin spice in this bar. That means that what I've said in the past holds true again: CCCC does well with flavors. That is not a given, even for bigger, more well-known companies. That's why I continue to buy their chocolate when I come across it: I have hope that they'll present me with something pleasant. Oh, yes, and I definitely prefer this Pumpkin Spice Latte Truffle Milk Chocolate to the one pumpkin spice latte I have had.

Posted by Deanna Skaggs at 9:02 AM