Maybe I'm just picky (okay, this is true, too), or maybe the chocolate companies have just run out of names for their chocolate bars. Because here I am running into yet another whose name I just don't get. Cheeky Cheeky Churro--really? Chocolate Churro or Churro Dark Chocolate wasn't good enough? Or not cheeky enough, I should say? 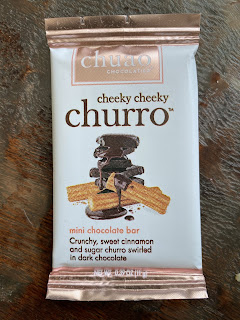 The funny thing is that when I go to Chuao's website to look at the page for this bar, they say that they like to "invite a touch of sparkle and sass to everything" they do. So I guess adding essence of churros to a chocolate bar is considered sassy, or cheeky. But is it really? I get the boldness of certain dessert-inspired chocolate bars. But this one feels fairly simple being that churros are mainly characterized by cinnamon and sugar--both of which go quite naturally with chocolate. And how is it cheeky to add "a little latin flair" to chocolate when cocoa has so much history in the so-called latin countries (with cinnamon, too)? Like I said, it doesn't make sense to me--but it also doesn't really matter. The name is just a way to add some flair. 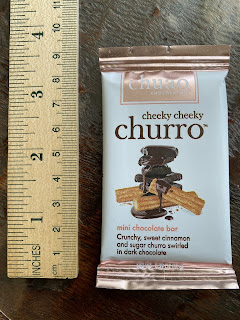 Because I was so harsh on the name, I'll say straight from the start that I did really enjoy this bar. I got the mini size, which is teeny tiny at just 11 grams. Unwrapped it seems hardly bigger than a couple of quarters. It comes in full size, too, if you prefer that. I, however, always appreciate a smaller option--especially when it comes to something like cocoa with such ethical concerns around sourcing. Though it's so tiny, there are three breaks in the bar, so you can enjoy it in three or even six bites. On the back, you'll see sprinkles of sugar and cinnamon. 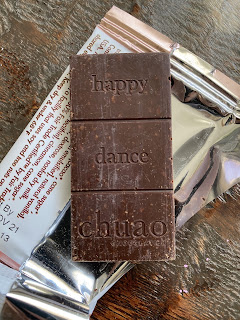 These come into the aroma, as well, along with the semisweet dark chocolate (it's 60% cocoa). Because the chocolate bar is so small and therefore also quite thin, those sprinkles of sugar on the back blend with the whole layer of chocolate as you bite in. So the effect is much like biting into that distinctive, crumbly texture of Mexican hot chocolate (Abuelita or Ibarra). Both the chocolate's scent and the initial part of the bite are reminiscent of this, too, given the inclusion of cinnamon, until the hot chocolate feeling fades in favor of a specifically churro approach to cinnamon. That is, a churro with a chocolate focus. So say a churro dipped in melted chocolate. How is it, then, that Chuao achieves this specific approach to cinnamon? 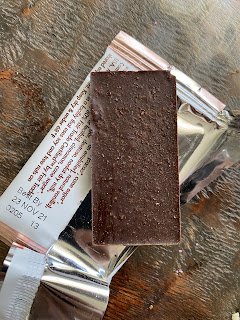 Let's return to those sprinkles. I have been referring to sugar and cinnamon, but really this is more like cinnamon sugar. And cinnamon sugar is different from simply cinnamon. Cinnamon sugar is sugar flavored with cinnamon, so it is much sweeter than cinnamon on its own, which is strong and spicy. Being again that this bar is so thin, you especially get to focus on the sugar crystals. I do wonder how the full size bar compares; maybe it's pretty much the same, but I would imagine the effect has to be quite different. Now, besides the sugar, there are also crumbly pieces of "bread" inside the chocolate. They're just little crispy crunches, not entirely unlike what you would get if you took a knife and started shaving off the fried edges of a churro. In the face of the sugar, they're subtle. You don't necessarily notice that they're there at first, but they do add to the crumbly texture and also add the dough element that you have in a churro but not in a bar of cinnamon chocolate.

The chocolate is a mild dark chocolate that also doesn't veer too much on the sweet side. It's the perfect stand-in for either a little dish of melted chocolate that you might dip a churro in or the cup of hot chocolate that might accompany dessert time.

What's so great about this chocolate bar is that the concept is simple, but they took extra steps to make it specifically churro chocolate. They could have made a good cinnamon chocolate and called it a day. Instead, though, they sprinkled cinnamon and sugar over crispy bread to make the focus specific. I've had plenty of chocolate with cinnamon, but I've never had a churro chocolate bar before. So in the zone of desserts turned into chocolate bars, this is one of the pleasantly successful examples.

Posted by Deanna Skaggs at 9:55 AM