Some things finish off better than they begin. That was the story for the last installment in my look at Theo's handmade confections. The name Nougottohavit, well, doesn't appeal to me. Such word play and word creation reminds me of the lesser, often short-lived (or at least less-liked) products from the likes of Hershey's (Whatchamacallit and such). So rather than putting me in mind of handmade chocolate or even just classic candy, it reminds me of cheapness. But it's just the name. 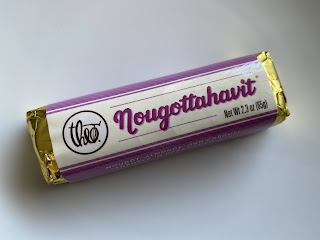 My doubts continued into the packaging, too, though. While the basic look is the same as it was for the Fremont Chew from yesterday, the magenta-raspberry (I could never be a fashion designer; I don't know my colors) doesn't give me the same vintage vibe. And this packaging, if anything, I found even more difficult to unwrap neatly (I like neatly): the outer wrapper had a glossy coat on it that didn't allow it to tear well at all, and even the foil had a sort of paper layer on its inside (versus being one layer that is foil on the outside and foil on the inside) that added a bit to the mess. However, the complaints end there. 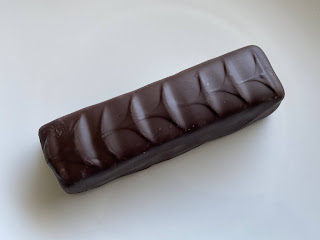 Like the Fremont Chew, this chocolate bar is a little more stout than the average candy bar. This is dark chocolate instead of milk; instead of reversing the look and decorating it with swirls of milk chocolate, the top is simply designed with texture ridges. As with the Big Daddy Marshmallows, the candy slices open to reveal beautiful layering. The nougat fills in the top half of the space, while the caramel dotted with almonds sits in the bottom half. All four layers of surrounding chocolate are if even thickness. 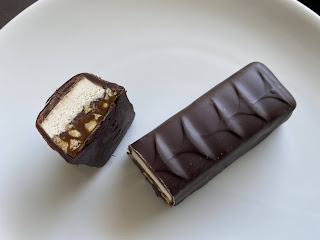 So based on the elements, this is obviously a Snickers-inspired confection. Just think of it as your best memories of Snickers, not as what Snickers actually is. The first bite is decadent: you get those lovely layers of soft nougat and chewy caramel. The almonds are nice and small so they add texture more than crunch; they seem to be more mellow than the peanuts in Snickers, if my memory serves. There is a slight saltiness in the mix, which doesn't taste like salted caramel; it tastes like the salt goes along with the almonds. That, in turn, keeps the almonds in casual territory; they don't feel like a "healthier" option or something like that.

The dark chocolate is pretty mild, like in Theo's other confections. So what the dark chocolate here seems to do (versus if they had kept to the traditional milk chocolate) (and besides making it sound more posh) is to keep things from becoming too sweet or greasy. There is still plenty of caramel and nougat. The chocolate makes an envelope for the sweet elements and holds then in rather than acting as the main focus of each bite. I don't taste the nougat hugely on its own; the caramel is the star, with the nougat helping it show off (and adding to the texture, of course). The almonds are the sidekick to the caramel. It's a gooey caramel but not stiff and has excellent, classic flavor. While the caramel certainly couldn't hold the place that it does without its friends of almond, nougat, and chocolate, it's the one I notice most.

So while my comments on the packaging were the opposite, I've been enjoying the Nougottohavit even more than the Fremont Chew. The theme is the same as it's been all week: better ingredients and a handmade quality make for a much better interpretation of a classic sweet. I'm rather sad to see the end of my week of chocolate confections, so maybe I'll look at some more casual chocolate bars in the next couple weeks before easing into the serious ones again. (Although Valentine's Day is also coming up, so it'll be time for me to get my yearly box from Valerie Confections soon--I guess I'm not done with the sweets yet after all.)

Posted by Deanna Skaggs at 9:19 AM