The fourth handmade confection that I'm looking at from Theo this week is a classic example of an upscaled candy bar. The Fremont Chew, described as marshmallow nougat enrobed in milk chocolate, takes its basic inspiration from a 3 Musketeers bar. Along with Milky Way, 3 Musketeers was one of my favorite chocolate candy bars (KitKat was the top). Soft, vanilla sweetness and chocolate. While I haven't exactly found myself missing them in the years that it's been since I had one, a chocolate reminiscent of such once-familiar chocolate candies is welcome. 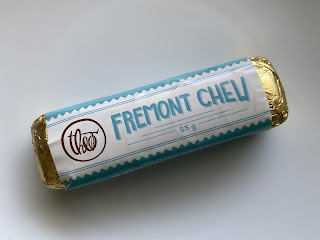 With pastel colors and another simple design, we have a pretty and vintage type look. My minor complaint would be that I couldn't open up or tear off the outer wrapper without making a frayed mess; I like something a little neater, especially if I'm not planning on eating it all at once. The foil unfolds nicely, though. Like we've seen earlier in the week, the milk chocolate is decorated with darker-colored swirls for a classic confection look. That brings us decidedly away from mass-produced Mars candies and over to small sweet shops. 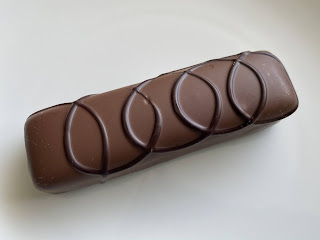 The bar I would guess is about the same length as an average candy bar (they come in so many different sizes nowadays and I rarely ever buy them anymore, so I can't say for sure), just thicker. It gives off the aroma of sweet, vanilla-filled confections and marshmallow. The inside is certainly much more marshmallow-looking than I'd expected. I'd expected nougat with a twist, but the decidedly white filling looks more like marshmallow with a hint of nougat than the other way around.

You can see that the top layer of chocolate was slightly thicker than the bottom or side layers due to the slightly rounded top. This doesn't negatively affect the bite, though, since milk chocolate is quite soft. Immediately on biting in, I got a nostalgic hit of Easter for some reason. It took me back somewhere I couldn't quite define. After contemplation, I believe I was thinking of the Easter egg malt balls. 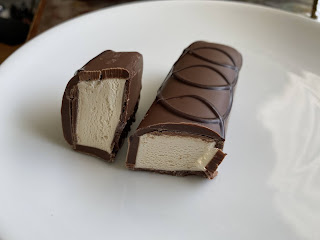 Here is why I would make that comparison. There is a definite marshmallow taste--but a specific kind of taste that is also somewhat chalky (I do love chalky candy) and still contains some of the standard nougat flavor. Along with the vanilla and nougat and marshmallow, though, there is another flavor. Although they still used sugar and corn syrup, there is also honey listed in the ingredients, and I believe the honey is responsible for this extra taste. It's a specific, rich flavor, and it seems to be what my mind initially connected to the malt of Easter egg candy.

So don't worry that this chocolate tastes like those candies (though it's probably been at least a couple decades since I had any, I think it's safe to say that they're in a different quality level). The flavors are primarily gourmet marshmallow (handmade as opposed to grocery store) and sweet milk chocolate. Since it's Theo, of course, the milk chocolate is good even though it is sweet. The nougat has a particular texture that is perhaps what also added to my malt comparison. It's very soft and while it begins with the expected fluffiness, it dissolves when it hits the tongue. So each bite disappears pretty fast, and you are left with some milk chocolate to finish off. While I'm not a candy maker, I would guess that the use of honey might also contribute to such quick melting.

In a way, this is the least exciting of the confections I've looked at so far this week. But once more, that isn't really the point. The point is simply to rework a confection with better ingredients and just a slightly different approach. The difference that the ingredients alone make is worth it. Like I said, I really don't buy 3 Musketeers or Milky Way anymore (that just isn't the type of product I want to support), but if I lived near Theo's flagship store, I could see wanting to stop in for this chocolate every once in a while. And the marshmallow twist on the nougat was interesting, not so unusual as to take away from the simple nostalgia but still enough to freshen things up. So yes, the Fremont Chew was another nicely eatable chocolate confection.