To say that I like art would be too broad of a statement--just as it would be too broad of a statement to say that I don't like modern art. Maybe we could say, though, that what you might generally think of as "modern art" is the type of art in which I am less interested. So while I enjoy spending time at the Desert Botanical Garden, not all of the art installations that they have had have been my favorite. The last one they did was fun, but some I have found disruptive to the garden's natural beauty.

So far, the current one is not like that; it blends in cohesively. Wind, Water, and Earth will be presented in three parts, each available for about a month. Natasha Lisitsa and Daniel Schultz of Waterlily Pond Studio have put these together with inspiration from the desert. Wind just opened this week. Three large metal rings provide the base for a kind of floral arrangement of desert branches. 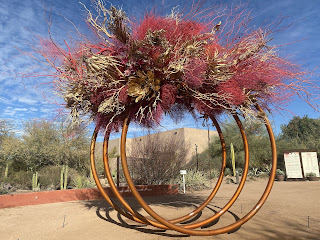 Being that the rings take up very little eye space and are painted a neutral, sandy color and that the top arrangement is made out of desert elements, this installation isn't jarring to the surrounding plants and landscape. It fits in, and I appreciate that. Other than that, it feels at first like a small thing to come and see. I mean, it's tall (16 feet)--but it's just three metal rings with a twig arrangement on top, right? From the descriptions of it, I thought it was going to be something more interactive. I thought maybe it would rotate and shift in the wind (and it was a windy day when I went to see it). But it just sits there.

Granted, I believe the intention was to be able to walk through the rings and look up into the arrangement, but it was gently partitioned off to walking (I suppose to prevent the possibility of multiple people touching the same surface, or walking in the same space--even though the garden is empty of people these days). So that would have been more interactive. In lieu of that, I walked all around in a circle and looked up at it from different angles with the sun and got my face up as close as I could to imagine what it would be like to be standing in the rings and looking up. And that gave me plenty to look at. 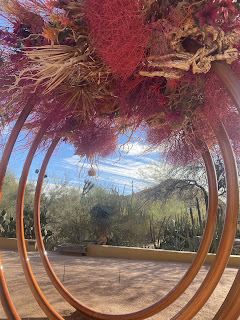 While the metal rings suggest "modern art," the top piece is like a floral arrangement you'd find at a farmer's market or a high end eco florist. So it's like a festive wreath--or almost a Victorian hat the way that there is so much volume sitting on top of the round rings. The use of natural elements, then, creates a classy rather than rustic or homespun look. 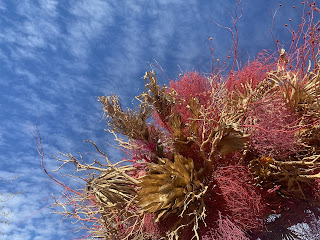 Though at first glance, the tangle of twigs looks just to be all natural elements, as you observe, you begin to see that much of it is painted. This creates brightness and contrast. Why the pink, though? Well, if the idea is to recreate a desert dust storm, pink is a fitting way to evoke the warm-hued clouds of dust. And the tumbleweeds are certainly elements you'll see tossing about in the wind. The tree branches are, as well: not only will they sway in the wind, but sometimes they'll break off. It isn't uncommon to see a palo verde completely toppled over in a parking lot after a bad storm. 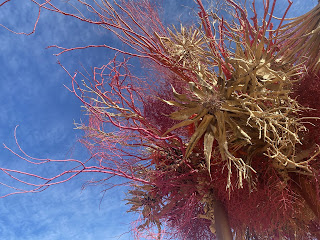 On the day when I went to see this installation, there was bright sun along with attractive cloud patterns. This made looking up at the twig tangle especially picturesque--though a day with more cloud coverage probably would have provided better lighting for pictures. 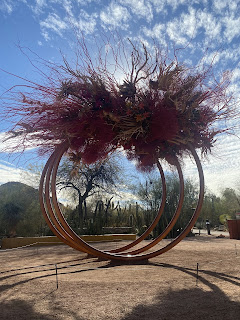 So maybe this piece was successful then. Visually, it suits the space. Thematically, it fits in with the place. And it provided me with something extra and new to observe while in the garden, and then something more to reflect on after I left. That's a good art installation, right? I only wish that, since the three installations are all in different locations in the garden, that they could have all gone on at the same time. (I'm guessing that the reason for this is the natural materials. These only last so long when left outside, especially what with all the winter rain coming in the next few days. Usually the garden's art installations last for a year, but even with spacing these out they're only going to be for three months.) Still, I'll be curious to see the next two--and maybe to return and see this one in different lighting.