Being that it's more difficult these days to have things to post about and being that my chocolate reviews are usually the most popular posts, anyway, I've decided to just roll with it this week and put up all my reviews of Theo's handmade confections in one spurt. Like I mentioned before, these are products that the grocery stores don't sell (like their chocolate bars). They are normally only available at their flagship store in Seattle, but right now you can also buy them online. While I rarely buy chocolate online, winter is my opportunity to do so (without it melting). So I was able to get five of these chocolate confections. 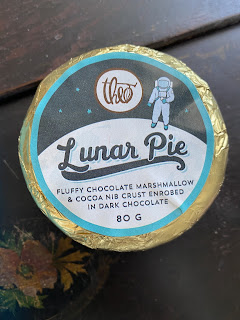 The first is certainly not the least. The Lunar Pie is a simple concept, that "twist on a familiar confection" type of thing. But what a twist it is. You can see that Theo's description is "fluffy chocolate marshmallow and cocoa nib enrolled in dark chocolate." Marshmallow and chocolate sounds pretty standard, but cocoa nib? That isn't at all common for use in this context.

The pie is big for a confection, about the size of one of my little fists. So bigger than if it were a Hostess cake. Because that, of course, is the main inspiration for something like this. (Might I also recommend the No Name Cakes at Mod Pizza if you just want an indulgence.) Unwrapping the little pie is delightful; the very fact that it appears so simple makes it appealing. My knife cutting for the picture turned out better than expected: the marshmallow is denser than average and therefore holds its shape enough that the chocolate didn't crumble and the whole pie kept its shape. 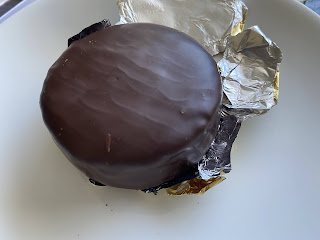 There is a chocolate ice cream look to the inside, both in its color and consistency. That feeling carries on somewhat even when you begin eating (minus the whole melting part, of course). The initial burst is unexpected--in a positive way. There is so much more weight of flavor than one might expect in a simple chocolate and marshmallow confection. 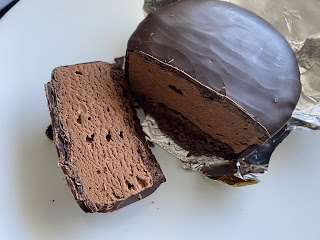 You have that richer, you could say more adult flavor of the nibs paired with the sweetness and playfulness of the marshmallow. So there is nothing bitter about the final product (which is also unusual about the use of nibs, especially where their flavor remains intact) and yet it isn't exactly sweet (confection sweet, that is), either. It is truly its own type of product.

As I mentioned, the texture is denser than the average marshmallow. It's a little chewier, too. Almost more like nougat--which may have something to do with my positive comments, as I like nougat much more than I like marshmallow. But it does have the flavor of marshmallow, which makes for a unique and thoughtful effect. As fun as it is, I find that a little can go a long way. Even just a couple of bites have enough richness to satisfy.

This piece is like an epiphany, a gift to the world of chocolate. Part of what I do when I review is to simply categorize chocolates (as opposed to saying that they're good or bad, or putting them on a star scale). But this brings together two categories: confections and gourmet chocolates. You can both sit and ponder it and indulge on it. A great way to start our week of Theo confections.

Posted by Deanna Skaggs at 9:46 AM