Normally I think of Old Town Scottsdale as the section below Indian School Road. On one side of Scottsdale Road are the art galleries and Ruze Cake House; on the other side are the Civic Center Plaza, Nonna Urban Eatery, The Mission Restaurant, and Bischoff's Shades of the West. That is, space to wander and space to sit, eateries, desserts, and moccasins.

Lately, though, I've been spending more time in the space above Indian School. There you can walk (or sit) by the canal and get dessert (or lunch, though I've not had any yet) at Super Chunks Sweets & Treats. Their Saguaro dessert is as delicious as it is beautiful. 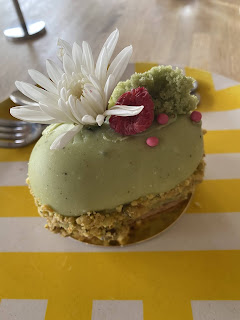 When I was on my way to get such dessert a couple weeks ago, I happened to park in front of Sewell's Indian Arts & Crafts. I had been thinking that it would be nice to get a new cross necklace, maybe something handcrafted from Old Town, and there in the window of Sewell's such a one caught my eye. So I thought, hmmm, maybe I'll be back after Christmas and take a closer look.

I did. The pendant is from the David Rosales collection, and it has Sonoran Gold turquoise. Being that it is somewhat big on me (two inches isn't too big in general, just on me), I also picked up a smaller, silver cross with a simpler but still unique design. I may end up wearing that one more often, but I wanted the statement cross to be a sort of signature piece for me. 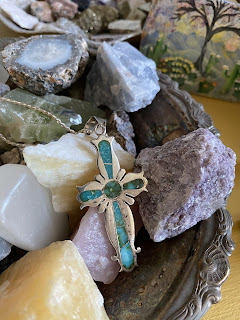 I ramble about all this here at Year's End to express some affection towards the fantastic small businesses in my area. And also to ponder what 2020 has been to me. This has not been an easy year for me--completely apart from the usual 2020ness. And yet this year has been incredibly beautiful, as well, in terms of what God has been up to in my life. So when I look at my silver and turquoise cross pendant, I think about who I am. The theme of this year has been reminding myself that I belong to God and he forms my identity. And that is a lovely thing. 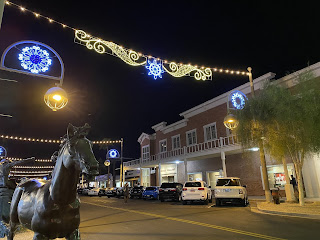 I stepped into this year with statements about the lies I have listened to about my identity and about what I do in fact believe (click here for that post). And now here at the end of the year, I find I've circled back around to that theme (even after having forgotten exactly how explicitly I had stated it a year ago). I made a statement about what I believed, and God has been showing me that truth in my life this whole year. And I think that perhaps if I were to take a next step for this coming year, it would be now that I have been focusing on God's declaration of my identity, to now trust in his promises for my life. 2020, identity; 2021, promise. And for both, I'll need plenty of trust.

Posted by Deanna Skaggs at 8:43 AM