We have come to the fourth and final Christmas chocolate from Black Butterfly. I chose this one as a special gift to myself--not so much for the chocolate but for the, um, keepsakes. There is one pound of 61% Venezuelan hot chocolate--and also a molinillo and an artisan terra-cotta hot chocolate pot. Price tag: $98. But that is a lot of chocolate and I knew such a chocolate pot would enjoy sitting in my home for years to come. 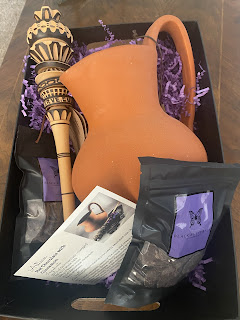 Everything came wrapped up gift basket style. The chocolate pot, which was bigger than I'd pictured, sat in a bed of shredded purple paper in a big black basket-box along with the two bags of chocolate, the molinillo, and the recipe card. So while it was a gift for myself, the packaging is all set for a gift to someone else, as well. It's a special indulgence for a foodie or chocolate-lover who enjoys handcrafted pieces. 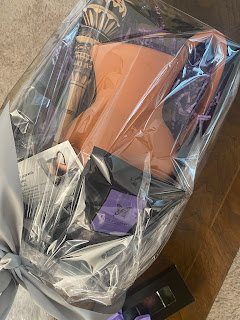 While we did have a molinillo growing up, I don't have one now. It hasn't been high on my priority list, I suppose, because I'm usually just making single servings of hot chocolate--and a regular-sized molinillo is better suited for a larger amount of liquid. That being said, however, I'm quite happy to have one again. I was admiring anew all the little shapes of the familiar object. There was nostalgia in there for sure. 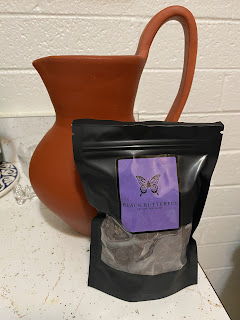 The recipe card is for hot chocolate with cinnamon. It calls for milk and a smaller amount of cream, as opposed to the suggestion of only using cream that came with the Hot Chocolate Bomb. I had about 1/3 cup of cream left from what I'd used there, so I went ahead and used that up. I also used two cups of almond instead of milk, 1/2 teaspoon cinnamon, and about 2.2 ounces of chocolate. The recipe card is in grams and milliliters, which I'm not so used to dealing with. So while I think I mainly stayed with the proportions (the recipe is for 6-8 servings, but I quartered it), I'm not positive on that. 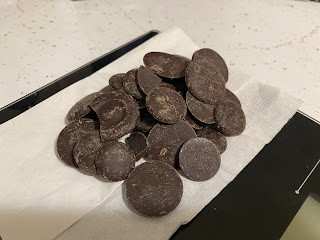 You place the chocolate into the chocolate pot and then pour the hot milk/etc. over it with the cinnamon. Here is where you'll bring in the molinillo. If you've never used one before, it's basically a wooden whisk. All the different shapes agitate the liquid to mix it up and bring up some froth. You use it by rolling the handle between your palms. On its own, it's a household object. But with the terra-cotta chocolate pot, the effect is delightful. I feel like I'm stepping back with my ancestors. Both pieces are from Verve Culture and are handmade in Mexico. 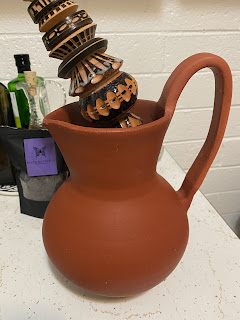 It felt more difficult to tell inside the terra-cotta if all the chocolate was melted or not. But the liquid was nice and hot, so it definitely all melted easily. The best part about having a chocolate pot is pouring it. While it may not have gone with the traditional Mexican look, I had to bring out my best teacup for the occasion. And I'm all about juxtaposition, so I found that the green teacup and the terra-cotta pot looked quite good together. 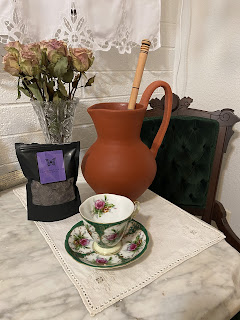 In comparison with the Hot Chocolate Bomb, this chocolate almost tasted sweeter--in a sense. With the other, the cream with a major flavor. Here it wasn't. So here I could taste the chocolate itself more, and being that 61% cocoa content, it's a sweeter dark chocolate. I did find, though, that even using just a little cream did still add richness that was pleasant. While cinnamon is pretty neutral to me because I'm used to adding it to hot chocolate, it does add a nice dash of flavor. It's a must in such a chocolate pot, especially if you haven't had any experience with Mexican hot chocolate. 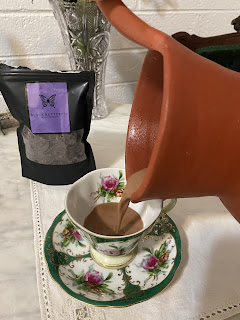 Buying hot chocolate isn't a frequent thing for me since I just do my cocoa powder and honey (and cinnamon and maybe other spices, too) at home. I would say, though, that there is a little more dimension to this chocolate--that is, to using actual chocolate rather than simply cocoa powder. It has that semisweet chocolate flavor, and the proportions seemed good with the liquids, as well. It came out neither too thick and dark nor too sweet or watered down. So if you prefer to buy hot chocolate and you're around Prescott, this would be a good option--even when you can't get it with the cool chocolate pot. One last note on that: while the tag said the pot should keep the chocolate warm, I found that mine cooled off, so my second teacup wasn't hot. It was steaming when I started. Did I wait too long or not have enough in there? 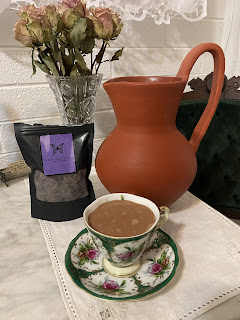 Either way, I'm still thrilled with my new chocolate pot. I've decided to keep it on one of my whatnot shelves (I love whatnot shelves, so I have two and wouldn't mind acquiring a third) under my cocoa pod and vintage chocolate mold (there are also turkeys on this shelf because turkeys should be around all the time, not just on Thanksgiving, nod your head even if you don't agree). Happy Christmas. 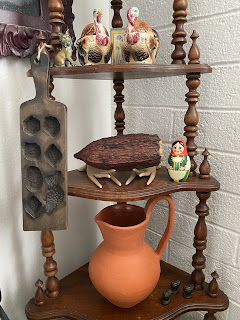