Five years ago, I reviewed two chocolate bars from Nibble; now I have the chance to look at some of their truffles. Before, I had noted something of a discrepancy between the casual-sounding brand name and the more serious approach to the chocolate bars. With this box of truffles, though, I see more cohesion. The name and the bright colors imply fun and indulgence, while the classic look of the truffles and the vegan label bring in consciousness. Very California (Nibble, you'll remember, is based out of San Diego). 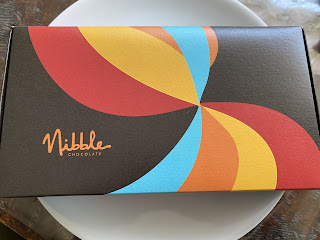 Given the focus on ingredients, I do want to make one note (I'll get the complaint out of my system, then I'll be done). On the front page of Nibble's website, there is a line saying that there truffles are made with just two ingredients plus the cacao and cane sugar, followed by ellipsis and a link to see more. Now, these are made with 72% Brazilian chocolate, cane sugar, coconut sugar, cashews, almonds, cacao butter, coconut oil, and the additional flavors (that is, spices or fruit or such) for each one. Even if you combine all the chocolate products into one ingredient and consider the coconut sugar and coconut oil one ingredient, how does that equal only two ingredients? Two ingredients plus ellipsis. Well, by that logic M&Ms only have two ingredients plus, as well. Maybe I'm missing something. 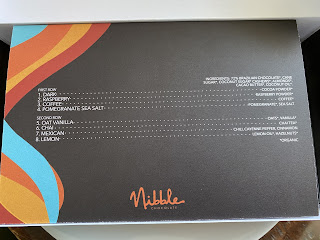 While both coconut oil/sugar and cashews are on my avoid list, there is certainly an increasing amount of the population who appreciate a good vegan product. Vegan chocolate isn't as much of an issue because dark chocolate doesn't contain milk, and even if milk chocolate is your preference there are now a good amount of companies making vegan milk chocolate. Vegan truffles are, in my experience at least, still a little behind. The ingredient you have to sub, of course, is cream. So here we have the coconut and the nuts in place of the cream. Alter Eco already does their coconut oil truffles. But what does the addition of almonds and cashews do? 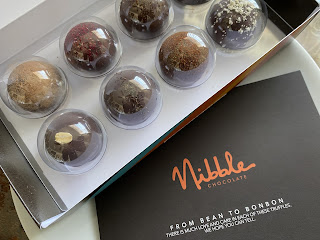 Dark - This is the classic style truffle, rolled in bitter cocoa powder. With all the coconut products I've been trying lately, I do begin to imagine I can taste a slight bitterness from the coconut. But it may just be my imagination. Overall this is classic cocoa flavor. The main difference is in the texture, which is much firmer than in your average truffle. The closest comparison I can make would be to some truffles I had ten years ago from the Momotombo Chocolate Factory (you can read that review back on Chocablog), though these probably aren't quite so dense. 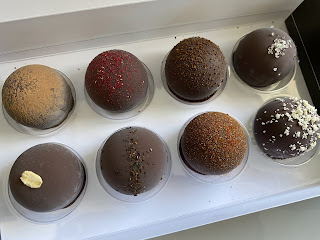 Raspberry - Sprinkled with red raspberry powder, this one has a good use of an earthy/couture duality. The dense ganache gives the earthy vibe, while red dots within it make for colorful little bursts of raspberry flavor. Either I'm warming up to raspberry after having it so much lately, or this was just a really great way to include it in a truffle. The chocolate is thick and rich but the raspberry is fun and whimsical, making for a satisfying combination.

Coffee - Yes, those are coffee grinds on its top. So you have crunchiness from there but not from anything inside the ganache. This one feel creamier than the first two, though still rich. Creamy rich chocolate plus coffee is an easy win, and the very thick texture works well with these flavors. 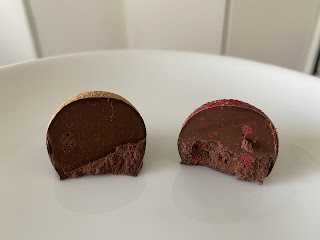 Pomegranate Sea Salt - Naturally, of course, this will be the one with salt on top. The salt flavor comes first, followed by a small fruity hit. As near as I can guess, the salt is only on the top, not anywhere on the inside; so this isn't as salty a chocolate as some (which is fine). What it is, though, is excellent salt, extremely flavorful. I haven't seen the combination of salted chocolate with pomegranate (or even any fruit, I think) before. The pomegranate, like I said, is a slight flavor. So this is more salted chocolate accented by pomegranate than the other way around. It's a unique approach.

Oat Vanilla - Perhaps this oat-topped truffle is inspired by the current oat milk obsession. It has a definite oat taste, you know, that flavor that isn't quite sweet or earthy but somewhere in that range. The vanilla is there as the element of sweetness. If this were a drink, it would definitely be lovely. I have mixed feelings about it as a truffle, though. The taste is pretty nice, but it's just so dense and that makes these flavors feel heavy. If, however, you like to sit and savor slowly (maybe treating your truffle like a kind of lollipop), then it works. 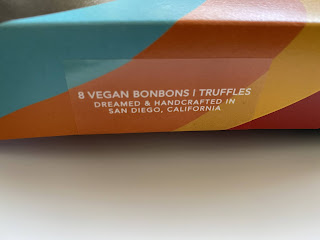 Chai - A sprinkle of dark spices form a band around this truffle's middle. There is rich chocolate flavor followed by a couple of beats of warm chai spices. In this case, the richness of the chocolate and even its thick creaminess pair well with the hefty spices. I could just be biased because I do love chai, but this one is quite nicely done.

Lemon - I had been going in order, but I switched the last two chocolates because I figured that the Mexican truffle would be quite strong and I wouldn't be able to follow up with another after it. The Lemon truffle is topped with white snow that reminds me more of coconut than lemon. It quickly brings a sweet lemon flavor that is soft like lemon candy rather than a strong, citrus zing. Probably it is especially less harsh given that strong chocolate base. So this is one of the instances in which I find lemon surprisingly nice.

Mexican - I was right to switch these two, as this is quite a strong one. The warm sprinkle of red-orange on its top is in fact quite a spicy topping. At first, I was going to call it medium-high spice level. Perhaps, though, it is stronger--and it increases rather than fades as the bite continues. I could taste the spices and the cinnamon and the chocolate, but I couldn't take a second bite. This definitely isn't a subtle use of chile; it's too strong for me. I do say that with some regret because the style of these truffles is perfect for these flavors. If you're into spice, enjoy.

Overall, these are a nice batch of truffles. The vegan element is either a positive in itself if that's one of your aims or it gives them a unique, slightly rustic style. That style pairs well with the San Diego culture of a flavor choice like the Mexican truffle, which can even lead into the more standard flavors, as well. The Chai was my personal favorite and maybe the Raspberry and Pomegranate Sea Salt were the most interesting to try out.