As I rush to get all of my Christmas chocolate reviews out before Christmas, I have two more items from Chocolove. They were restocks at my store, so they must have sold out so quickly that I never had a chance to get them when they first showed up. The first is not actually a Christmas item. With the Pumpkin Spices Bites, we're going back to fall--but people make pumpkin pie for Christmas, too, so let's go with it. 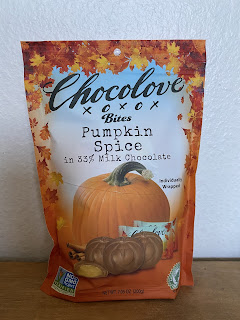 The bag is nice and cheery, though I've no pumpkins still out with which to take pictures of it (though I do have a turkey ornament on my mini tree that got to help out). The leaves make a warm border for the ripe pumpkin in the center. With the whole pumpkin spice trend, it's nice to have products that are generally autumnal and not specifically Halloween. Which is also nice because that means I can be opening these up just before Christmas and they're not too out of date. 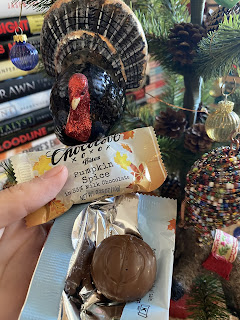 The individual wrappers are light in color with more fall leaves. Inside, the pumpkins are quite round, almost like circles. The look is pretty cute. The Chocolove double C's that form the heart shape on their surface, though, I don't favor as much. I find the they interfere with the pumpkin look, which would be better as the first visual you notice. But I suppose hearts go with a loving fall vibe, eh? (Or first day of winter, as they case may be when this post goes up.)

Colored in pale orange, the chocolate's filling looks just like pumpkin pie. It brings the light aroma of familiar spices. On tasting, I indeed found pumpkin pie flavor. It's basically the standard pumpkin pie flavor sitting in the middle of milk chocolate, which is quite welcome. While some pumpkin spice products only have the spices and not the pumpkin, this one does have pumpkin (both pumpkin puree and pumpkin concentrate). Hence the pumpkin pie effect. 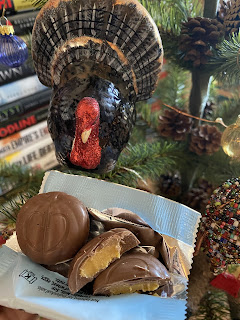 They also used cream in here, which is interesting and not too common for a grocery store product like this. And they disclose their spices (ginger, cinnamon, nutmeg, and cloves), which not everyone does, even when they're pretty obvious standards like this.

Posted by Deanna Skaggs at 9:23 AM