A Treasury of Classic Christmas

It is possible that I have too many of the Barnes & Noble leather-bound classic editions. But they're just so beautiful. One of the most recent ones I acquired was two years ago a few weeks after Christmas--even though A Christmas Treasury was by then out of date, I knew Christmas would come again and I could then have this volume ready for me. 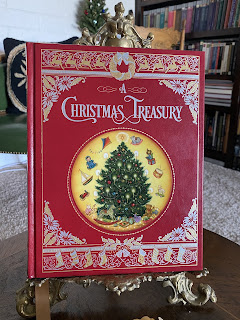 This the year of less events and gatherings turned out to be a great year for some quiet Christmas reading. Though the book looks large, it is not a long read. There are ten short stories and nine poems. Essentially it is filled with the classic Victorian Christmas. The outside of the book is a good tell for the inside: besides the gold-edged pages, there are also plenty of illustrations and visual details A gift book but also a readable one.

The book begins with the obligatory A Christmas Carol. It's always good for a reread. There are also familiar stories that if you're like me, you may not have read in the original before. These would be "The Gift of the Magi" and "Christmas Every Day." While Disney shorts and such are good ways to take in stories, it's also nice to read the text that inspires so many retellings. L. Frank Baum's The Life and Adventures of Santa Claus was a surprisingly intriguing read (though perhaps not so surprisingly--it wasn't by accident that The Wizard of Oz became so popular). While I'm not very much interested in Santa Claus for Christmas, this was a fun Santa Claus myth that put me in mind of C.S. Lewis's style.

And you know, even though there were a fair amount of Santa Claus stories in here and even the ones that didn't include him also had a lot of presents and trees, there was a shift in focus to what I'm used to from modern movies about Santa Claus. The movies all seem to be about "believe in Santa Claus who gives us presents so that you can maintain magic in your life." These stories, though, were about bringing the heart and the warmth of Christmas to those around you. Presents are fun to get but it's better to see how you can bring about good things to the people in your sphere of influence. Decorations are fun but love is better. The little Christmas tree in the poem of the same name finds its place. We all have a role.

That's what was so refreshing about this collection. These stories aren't about the self. Even the stories about Santa Claus get back to the concept of selfless giving, giving for the joy of giving and helping, rather than about trying to grant your own wishes.

Posted by Deanna Skaggs at 9:26 AM