I like novelty. I do. I also like quality. When the two intersect, that is where there is magic. Black Butterfly's Christmas pre-orders listed a Chocolate Salami, which sounded pretty cute and so I thought it would be worth trying. I just wasn't sure what I would think of its taste--chocolate filled with almonds and currants and biscotti and brandy, what would that be like? 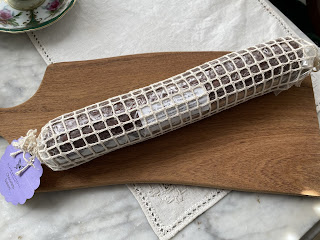 The Chocolate Salami, in its own salami netting, is indeed very cute. Because you'll want to keep it refrigerated until you're ready to eat it, you just get it out for a bit to come to room temperature before serving. So if you were going to bring it over to someone's house, the commute time would serve as the thawing time. The netting comes off easily (I never buy real salami, so this is my only experience with it). Inside the chocolate is in the bottom of a clear bag that's folded/rolled over to fit into the casing. Being that this is just slightly cumbersome, you do have to take the whole chocolate out of the bag to serve--which is fine because you will want it all out for display, anyway. 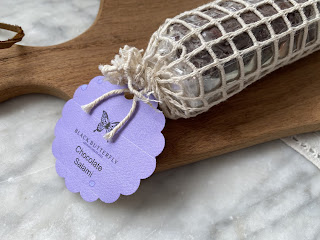 I do recommend bringing out a cutting board for your display--whether you're having a little get-together or just partaking with your household. The chocolate salami looked quite charming on my mesquite board. The feel on my hands was like powdered sugar and fudge, and the aroma was of chocolate ganache. 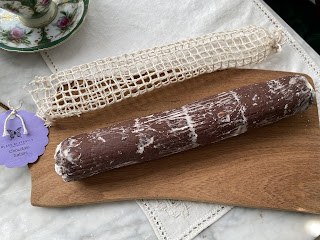 The chocolate slices easily. You might only get a little stuck for half a second if the knife comes upon one of the almonds. Otherwise it's quite soft. In the slices, you can see that the composition is a soft chocolate like a ganache with slices of nuts (almonds) and fruit (black currants). There is also biscotti but I didn't really see or taste it specifically. 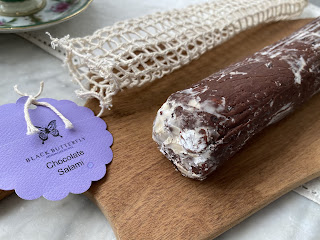 As far as substance, the chocolate is halfway between fudge and ganache. It's softer and smoother and richer than fudge--but also denser and with more of that crumbly-fudge-texture than is ganache. Kind of like with the Hot Chocolate Bomb from yesterday, there seems to be more cream than sugar. So while you do have the flavor of dark chocolate and its richness, the overall effect isn't super dark because there is a good amount of cream involved. 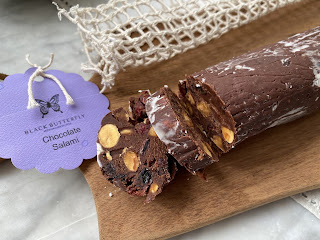 The almonds give a nice flavor and soft crunch. The currants are little bright spots of flavor in there, too. I'll take this moment to appreciate the superiority of currants to raisins. (I can eat raisins by themselves, but I don't usually like them in anything. Currants, though, I'm always sticking in oatmeal.) They have a more interesting flavor and a chewier, less puffy texture. So while I was, as I mentioned, a little concerned about what picky-eater I would think of all sorts of things thrown into this chocolate, I needn't have worried. Side note: if your gathering has a few people, you should be able to finish it all off in one go. But if you're just a couple people, you can still put the rest of the salami back in the bag, roll it up, and even stick it back in the netting to keep it close and airtight before putting it back in the refrigerator for later. 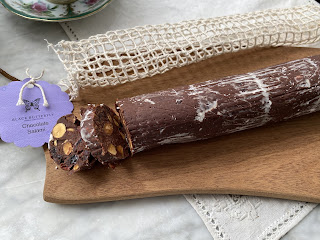 There is a foodie aspect to such a piece as this chocolate salami. It has that appeal. But it's also approachable. So you can go with either the silly angle or the serious angle--or both. Serve it up on an appetizer board next to cheese and fruit. Or bring it out for dessert with after-dinner drinks. Whether you're going for an elegant or casual evening, it'll fit in and be a sure palate-pleaser as well as conversation starter. I have found my new favorite kind of salami.

Posted by Deanna Skaggs at 9:33 AM