Generally, I don't watch Bible story movies. But as the years pass and I continue to watch 2006's The Nativity Story, I find that I like it more and more. These are not the biggest reasons to like it, but it is entertaining that it is directed by Catherine Hardwicke who also directed Twilight (just the first movie), Joseph is Poe Dameron, and Gabriel is Deep Space Nine's Dr. Bashir. All that aside, what I like about this movie is what perhaps other people don't like: its stripped down simplicity. (Tangent: that's also what was good about Twilight that the later films lacked. In fact, Twilight and The Nativity Story have a lot in common--but would anyone even want me to ramble about that?) 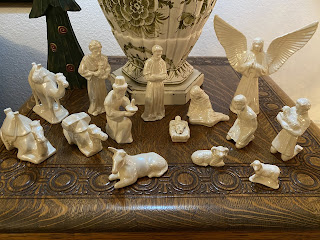 The story of the nativity is amazing because it is the story of ultimate love, that God would come down to earth to be with his people. But the details of the story itself are relevant because of how the people involved acted. The people primarily being Mary and Joseph. A young woman whose expectations for her life are suddenly shifted but who gracefully submits to God's will. A man who has his boat rocked because he thought he chose a Godly woman for his future wife--and because he is a Godly man he chooses not to accuse her when she suddenly appears to be anything but. And when he, too, receives the message about the child she is carrying and knows that she has remained true, he goes along with her and helps her.

What this movie so well portrays is the way in which Mary and Joseph each individually submit to God's will for their lives. That will includes their marriage. So as they each separately seek to follow God, they find themselves appreciating each other and growing closer. First there is respect and value, and then there is affection.

In Mary, there is submission. When she sees that Joseph understands and knows the truth, she is happy to accept him as her protector, shielding her with his name. In Joseph, there is that protection. When he knows what Mary has agreed to, he will stop at nothing to keep her safe. It doesn't matter what other people say or think and it doesn't matter what physical hardships come. They make for quite a graceful pair.

So that's what I see when I watch this film year after year. The amazing fact of Jesus, God in human form, born on the earth comes in the final picture. But the length of the film shows these two people who allowed God to work through them. And that's pretty inspiring.

Posted by Deanna Skaggs at 9:47 PM