New to Black Butterfly this Christmas are the Hot Chocolate Bombs. Compared with the Hot Chocolate Ornaments that serve four people, these are single serving treats. They are designed still to be like ornaments, so I put mine on my tree for a picture. A clear case wraps up with a purple ribbon and a small label that also has the instructions for making the hot chocolate. The price is $9, which is reasonable for a beautiful gift of good chocolate. 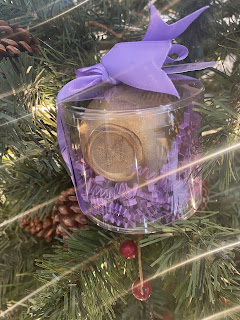 My ornament was gold: it's a sphere marked with a butterfly seal. Classic vintage for a classic Christmas. This is 61% dark chocolate, and the hollow spheres are filled with chopped chocolate and mini marshmallows. So you can gently rattle the ornament to hear its insides. The assembly is to heat milk or cream (cream is recommended for richer chocolate) and pour it over the ornament. So it's perfectly sized to fit inside a mug. I first brought out one that is just slightly smaller than standard, and while the ornament fit in, I worried that not all of the cream would, so I switched to a slightly larger mug. 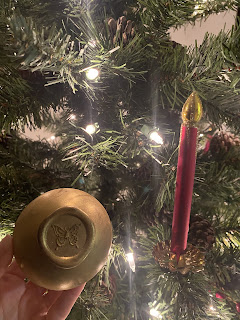 While I normally don't even use milk, I did decide to splurge on some cream for this chocolate. It is Christmas after all, eh? I heated that up in a saucepan and then began to pour it gently over the ornament inside the mug. 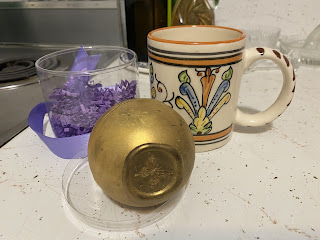 This is absolutely the funnest thing to watch. You would really need a video to properly portray it. First the little butterfly seal rotated to the side instead of sticking straight up. Then a spot began to melt in the ornament's surface. 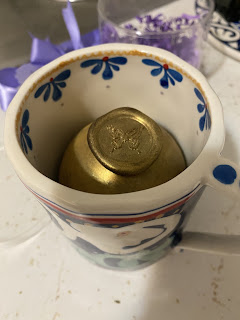 That spot became bigger and then there was a sudden pop--these are called hot chocolate bombs for a reason. They explode delightfully. 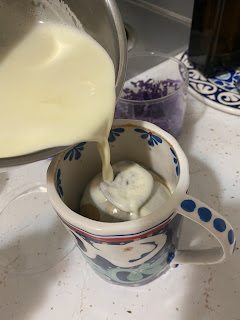 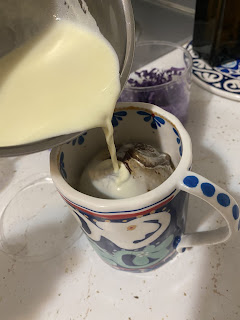 The explosion exposed the marshmallows, which quickly lifted to the top. And there I had it, the sudden appearance of a marshmallow-topped mug of chocolate. Gourmet gift this may be, it also brings out the child inside. If you want something to reawaken your awe and wonder, this'll be it. 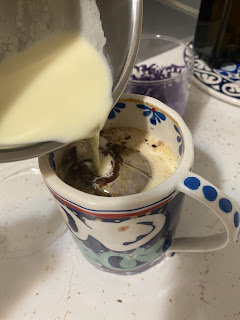 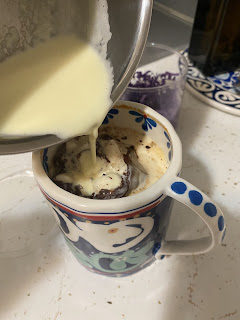 Now as perfect as the chocolate looks at this point, you do still need to stir it (as per the instructions); the bottom half of the ornament is still unmelted even after the marshmallows rise up. While the instructions said to use 8-10 ounces of cream, I probably used about 8.5. So perhaps that's why I didn't feel like I got the chocolate to completely melt even with mixing. 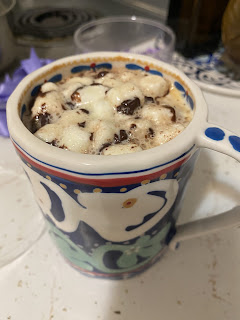 All of this time you're smelling chocolate sweet and rich at the same time. And its flavor? You remember the chocolate they drink in The Santa Clause? What you imagine that it might taste like, that is what this chocolate tastes like. The first sip was a dream, so rich and yet not overwhelming. Naturally, there is a greatly creamy texture since I did use cream. So you have the creaminess that is normally associated with milk chocolate but with the dark chocolate flavor. There is more cream than there is sugar, which tones down the darkness without making it too sweet. 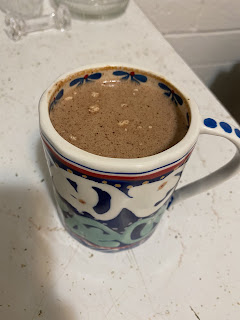 And that solves one of the big conundrums of hot chocolate: I and I believe many of us don't like very dark hot chocolate (unless perhaps in small amounts of interestingly-flavored chocolate as from somewhere like Kakawa Chocolate House in Santa Fe), but I also don't want it to taste like nothing but sugar. So this approach of chocolate that is both rich and creamy is the answer, one that should appeal to a wider variety of palates. Granted, this is specifically for making it with cream (maybe I should have bought two and tried the other with my almond standard instead of dairy just for comparison). But I went with this as the intended way of preparation.

This chocolate is such an indulgence. It isn't so much an everyday chocolate as a special occasion treat. It instantly evokes warm and cherry Christmastime memories. Stir some up before going out to look at lights or before snuggling up under a blanket to watch or read a favorite Christmas story. It's quite a sacred beverage.

While this is one standard serving, I would have preferred to split it. So if you have tastes like mine, you can plan on sharing with a loved one. What I wouldn't recommend (which I often do with hot chocolate) would be to water it down much more than the recommended amount of milk/cream/substitute. A full serving was definitely too much for me to enjoy, but the flavors of that first half serving were flawless so I wouldn't want to mess with those proportions.

I don't know what I was expecting from this. Something pretty, I guess. It is pretty--but it was also incredibly fun to make and delicious to sip. Score on all three points then. If it's too late this year to get one, perhaps next year place an order of one for yourself and some more for gifts.