Our second of the Theo handmade confections is the Big Daddy Marshmallow. In description, it sounds like it has more elements than yesterday's Lunar Pie did, but in its final state it is somewhat simpler. If the desired effect is to replicate campfire s'mores without a campfire and with some better chocolate and marshmallows, then the effect is achieved. 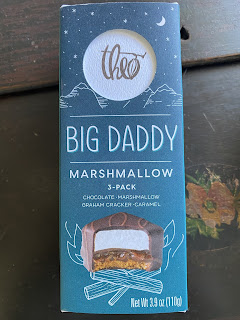 There is certainly much more going on with packaging on this one. Of the five confections I ordered, this one has the most to look at before you even get to the chocolate. The outer sleeve is the color of a starry night sky, and using only white for both the text and illustrations means that they were able to pack in a lot of design and still keep a simple look to it. Well-done. Also notice that they don't use the words s'mores or campfire--it's all there in the imagery. One side of the sleeve shows off the four elements that compose this confection, while the other shows a mountainous territory with I suppose Bigfoot toasting a marshmallow on a fire. Trendy-cute-outdoorsy; it reminds me of all the little shops in Flagstaff. 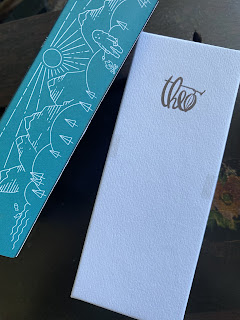 The sleeve slides off to a plain white box marked with the Theo label (which is what shows through the circle hole in the outer sleeve). The box is almost more like a jewelry box than a chocolate box; the feel is special. Inside under a thin cover are three marshmallows in their little square liners. They look like giant truffles in there; they're more the size of petits fours or chocolate-covered strawberries. Makes sense, though: graham crackers for s'mores are much bigger than truffles, too. 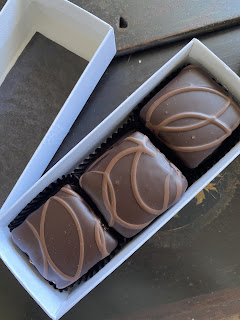 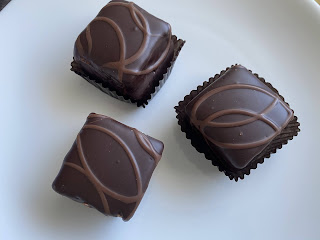 It was easier than I'd expected to slice my knife into one of these squares. And I'm certainly glad I did: the four layers display in person almost as well as the do in the picture on the packaging. That's pretty rare, and I certainly wasn't expecting it with such gooey layers as marshmallow and caramel in there with the graham cracker and chocolate. Yet there they are, four distinct layers (well, the chocolate is on both top and bottom, so it's technically five layers, but you get the point). 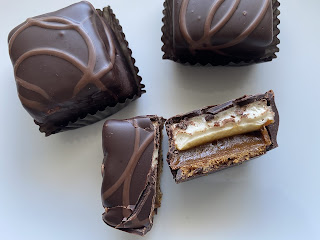 The marshmallow catches your teeth as you bite in, giving a delightful sort of snapping as it separates from the main piece. It's a little dense and chewy but not like the marshmallow of the Lunar Pie; this is more just the texture of a handmade, gourmet marshmallow (which, of course, it is) as opposed to one from a grocery store bag. The caramel adds in good flavor, especially towards the end when everything is almost melted out.

In primary focus is the marshmallow, the chocolate and caramel seem to tie for second, and last comes the graham cracker. While graham crackers are a pretty big proportion of s'mores, I much prefer how it takes the backseat here. There is just a tad of crunch and graham flavor to ground the sweet, gooey elements. The chocolate is darker than your typical s'mores chocolate, and the caramel adds in a nice indulgence that helps to make up for the fact that nothing in here is melted as it would be in a campfire s'more. What's most fascinating is that, especially in the aftertaste, there is, however, something of a smoky taste. Whether it is in the caramel or the marshmallow or my imagination, I don't know. The molasses in the ingredients list may be what brings in that toasty flavor, but that's only speculation.

While I'm not naming these marshmallow confections the "epiphany" that was the Lunar Pie, they remain delightful, extremely well-executed chocolates. The ingredients are good, and the flavors and textures are in balance--and so the effect is exactly as desired.

Posted by Deanna Skaggs at 9:30 AM