While I don't find myself at Trader Joe's very often anymore, when I'm there I do like to at least peak at their chocolate. There can be some interesting finds. It's all in Trader Joe's packaging, but it's made by different companies. I remember the time when I was convinced that they were selling a set of Pralus chocolate bars. Today's chocolate, the El Campano 78.5% Dark Colombian Chocolate Bar with Cocoa Nibs and Sweet Plantain, I chose because it's rare and exciting to find banana in a chocolate bar. 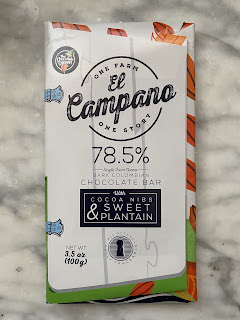 I was a little uncertain how to label the post, though. What is the company of origin? Sometimes for something sold at Trader Joe's, there won't be anymore info, so I'll just list Trader Joe's (even if it's behind-the-scenes made by another company for them). But there are a couple of names on this packaging. The Chocolate Dream is on both the front and back, and the fine print says that the chocolate is manufactured by Casaluker in Colombia. From what I understand, The Chocolate Dream and Casaluker (sometimes called Luker Chocolates) seem to be if not the same company then sister companies or something like that. The Chocolate Dream sets out to create positive impact in both the social and environmental effects of cocoa production. Creating good jobs related to the cocoa industry and bringing the land back to a sustainable place for both plants and animals, all of that sort of thing. And Casaluker makes chocolate--often for other companies. Perfect for a partnership with Trader Joe's, who mainly sells products dressed up in their own packaging. 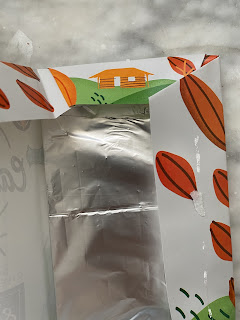 About the packaging, though, this one leaves something to be desired. Looks like they were trying to go for that quirky Trader Joe's tone, but the result looks like the wrong part of the design ended up on the front, like the folds and edges don't match up the way they were supposed to. There are cute cocoa pods and a little plantation house, but they're not visible on the front. Granted, the idea appears to be that you have the door on the front with the "All access, fully traceable" keyhole so that you can open up the door and the packaging and find the cocoa plantation/all the transparent facts about the production. It's a fun concept; it just doesn't come together in effect as well as it could. 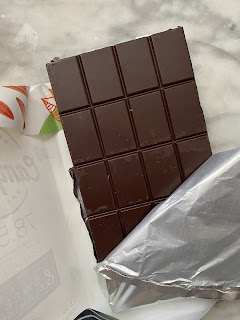 Inside its silver wrapper, the bar is composed of 20 plain and smooth rectangles. Their perfect level of shine reminds me of Theo, who also emphasizes smooth surfaces in their designs. On the back, you'll find a texture similar to that of crisped rice chocolate; the little lumps of plantains are small and round lumps beneath the surface. 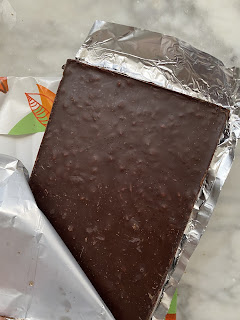 The aroma is semisweet, but the initial taste is more on the bittersweet side. In fact, it leaned more towards bitterness than I'd been expecting. This would be because in my excitement about the plantains, I had all but ignored the cocoa nibs. And cocoa nibs do have more of a bitter flavor. They're a definite presence here, adding that blueberry taste along with their pleasant crunch. All good and well, but what of the plantains I'd been looking forward to? 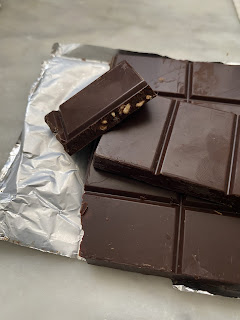 Technically, you can tell they're there all along because the crunch is different from how it would be if there were only cocoa nibs. The bananas are softer, almost crisp at times. Sometimes some will linger in my teeth after the chocolate melts. But is that all, after all my excitement? True, smaller bites make it a little easier to discern some banana flavor. So you have the sweetness of the plantains paired with the bitterness of the nibs and a medium bittersweet chocolate base; it's a unique combination.

I am a little disappointed that the plantains don't have a more central role. Perhaps if they were bigger? Either way, though, the chocolate is still good and a dash of banana is nicer than none at all. And it's certainly been interesting to learn about The Chocolate Dream and Casaluker. The El Campano farm where the cocoa for this bar was grown used to be a cattle farm; the transition to cocoa has allowed many birds and animals to return to the area and "formal jobs increased from 5 to 267" (as the packaging explains). I'd say that's a good chocolate dream.