We have come to the third and final piece in Waterlily Pond Studios's art installation at the Desert Botanical Garden. We began with Wind, continued with Water, and now finish with Earth. While the other two were outdoors, this is the first one to be inside (in Dorrance Hall). 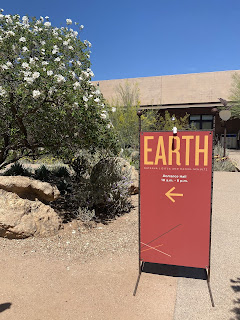 The structure is larger than Wind and also more filled in. The many layers of flowers represent the layers in geological formations, which is an interesting touch. Each layer of flowers holds slightly different color, with the darkest at the bottom and the lightest at the top. The shape, though, reminds me more of Utah than Arizona; even though there are rock formations here, too, this particular one doesn't feel as Arizona Grand Canyon than for window rocks like Utah's Arches. That's minor, though; we're still talking Southwestern imagery. 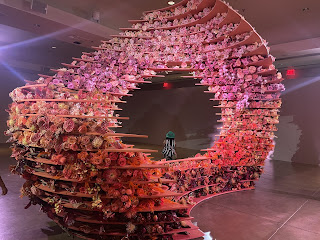 It's a pretty piece, being made of so many flowers (over 10,000). You can certainly take your time walking 360 around it and looking at each layer. You'll find something a little different on each side, too. It's certainly made for the day of the selfie--which is what the window especially lends itself toward. I could see this on display for group photos at a big wedding or a conference or corporate event. It's like an updated balloon arch, no? 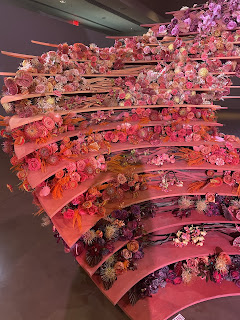 That being said, I will mention that the lighting did not seem the best in Dorrance Hall. Spotlights get in the way of particular camera angles. And the lights lend a dim and murky tone to what is in fact a bright and lively piece. Was I the only one to think so, or does anyone else agree? 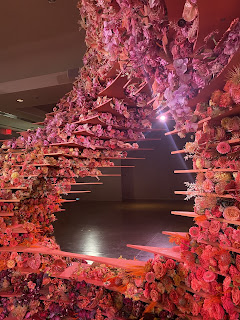 So again, it's a pretty piece. But I'm left to wonder what peonies and orchids really have to do with the desert. I don't mind melding disparate things. But if an art piece is made as an expression of a certain region, then doesn't it make more sense to make it using elements of that region? I guess not necessarily. The paint in a southwest painting doesn't come from the southwest. Still, though, for all the work that went into this one, I feel like you have to be told what it represents rather than the piece speaking for itself. I don't necessarily see "earth" when I look at it. I see pink flowers until I deliberately imagine that they represent layers of earth. 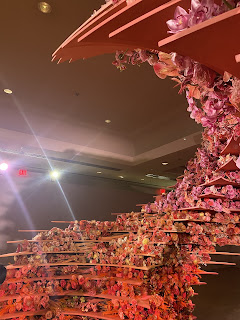 For that, I would still say that Wind was my favorite. Water was my least favorite, though it did do the best job of interacting with the space in the garden. Earth feels most separated from the garden, and not just because of its literal separation in the event hall. Yet it's still a nice place to take pictures and a conversation piece, and that's all well and good. 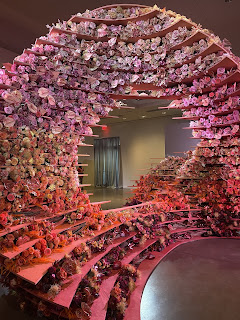 Posted by Deanna Skaggs at 2:00 PM