Let's go on a little adventure through Old Town Scottsdale, shall we? Changing seasons usually makes me hungrier, so what might be some of the food we can find?

A late morning can begin with a visit to Berdena's for perhaps a Honey Lavender or Cardamom Rose Latte and their Smashed Avocado Toast. You know, I had never ordered avocado toast from anywhere until I went here. It seemed like something you can just put together at home, right? But what with the bread and salt and lemon they use, they certainly make it worth ordering. And as far as the coffee, I do love finding rose on menus. 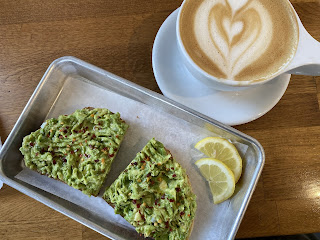 If you catch a festival day (like this past weekend's Arizona Indian Festival for Western Week), you might run into The REZ an Urban Eatery. They make vegan fry bread, so though you can still get meat options for toppings, you can also choose the vegan option that will include the three sisters (corn, beans, and squash). I probably get about as excited for zucchini as I do for rose. Fry bread was essentially created as survival food; people on reservations made it out of the food supply boxes they were given. And now it's basically become a fair food. This fry bread, though, interacts with the history of fry bread and with traditional foods on a deeper level, as far as how they prepare and top it. And it's a much lighter option than the standard kind. They also have blue corn mush and sweet tamales if you so favor. 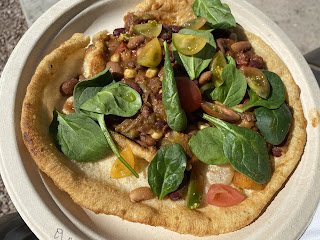 Or for another kind of sweet, you might run over to Super Chunks Sweets and Treats. I've mentioned their desserts before; the one I have here today is their Signature Brownie, which is pretty flawless. Though I don't have a picture of it, since we're on the topic of food, their Schmaltz Chicken Salad Sandwich genuinely is as good as they say and is easily the best I've ever had. 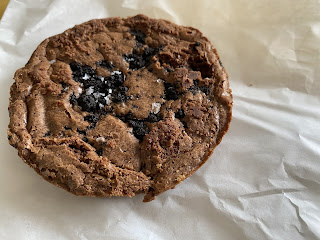 Old Town has pretty much an endless array of breakfast, lunch, dinner, and dessert from locally-owned businesses, many of whom are using top ingredients. I've been especially feeling the love for them these last couple of years as I slowly branch out to trying more places.