Last week I mentioned that you can't always tell what company made a Trader Joe's chocolate. This Espresso Dark Chocolate Baton, for instance, does not list any other name. The only clue is that the label says it's a product of Canada. Not having had much Canadian chocolate, I certainly can't even hazard a guess as to who might have made this one. 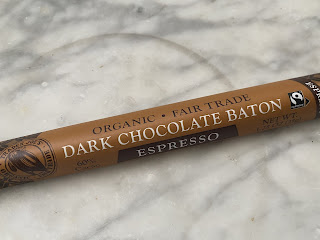 The style of the packaging is pretty classic Trader Joe's (that is, they have a couple of styles, one of which is quirky, which is not the case here). Various shades of brown and some light pattern on the edges create a simple look that is neither rustic nor overly elegant. 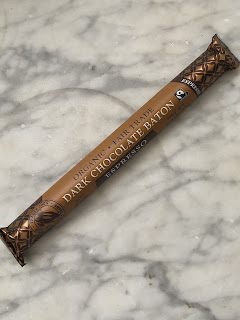 The wrapper opens up to the smell of walking into a coffee shop; that's enticing and encouraging. While I was neutral to the baton shape while the chocolate was wrapped, unwrapped it has quite an appealing pyramidal design. Chocolate bars generally all look pretty similar, so the variation here is welcome. While a shape like this might be easier associated with a candy bar than a chocolate bar, the context here makes it sleek rather than casual. It reminds me more of a high-end dessert than of a candy bar. 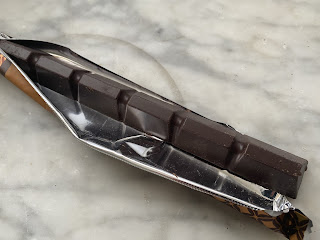 That being said, however, the six pieces in the pyramid do have more of a candy bar than chocolate bar volume. I mean that even though they are bite-size chunks, they're thick. A big bite of chocolate candy makes sense, but for something like this I prefer something smaller; so I prefer to take just half of each piece at a time. Size is a personal preference, though, and dividing the pieces into this particular size does visually look balanced. 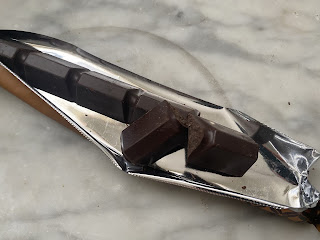 Since the size and shape of the pieces did seem to encourage munching instead of melting, I went ahead with chewing the chocolate. And given that the coffee is present in grains, it's definitely better to take this approach. Coffee grains seems to be the most common way to include coffee in a chocolate bar, but it does seem to come across a little differently in each particular chocolate. This one seems even crunchier than usual, so much so that the texture at times feels like it's eclipsing the taste. I would then call this one of the less successful uses of coffee grounds in chocolate. They may have been trying to create a sense of coffee beans pieces versus grains, but to me it's a bit much.

The coffee taste is fine, though. Not the most extraordinary coffee flavor I've come across in chocolate, but perfectly sufficient. What I find I'm most admiring, strangely, is the chocolate itself. This isn't because it has amazing flavor notes or anything like that. Rather, it's because this is an excellent example of 60% chocolate, a cocoa percentage that I normally don't favor. Usually it's too light to have interesting flavor and yet also light enough that it has too much sweetness for dark chocolate. In this case, though, (and this may be due to the coffee taking the primary lead on flavor) the chocolate isn't overly sweet. It isn't exactly dark, either, and it does almost have a creaminess to it (there is no milk here). Yet it hits the perfect note for coffee. A touch of richness and a touch of sweetness bring to mind a cup of coffee with just a dash of cream and sugar.

As far as the pairing of the coffee with a particular type of chocolate, then, I do score this chocolate bar highly. Overall it isn't the best coffee chocolate I've come across, but it still does a nice job.