Even though I'm always talking about how I, preferring to just mix up my own, don't tend to buy a lot of hot chocolate, I also seem to find myself reviewing it regular enough. The last time I picked up an order from Zak's Chocolate, I added one of their Small Hot Chocolate Sticks because of curiosity and indulgence. 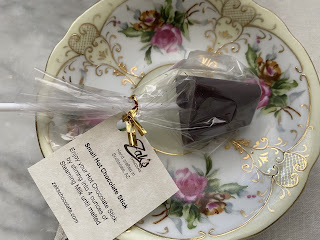 The small stick is designed for a single serving. So it's a simple product. A plastic stick holds a piece of chocolate on one end that's covered in clear wrap with a plain, paper label. Good for either an impulse buy or adding something sweet to a gift. 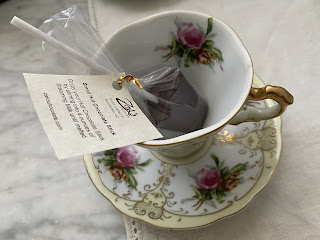 As you can see, the chocolate is in a sort of triangular shape, which gives it a sleek and modern look that elevates the simplicity. There is a semisweet aroma. On the label, the instructions say to stir into four ounces of steaming milk. Probably this style is especially convenient if you use microwaves, but for myself I heated up the almond in a saucepan before transferring it over to a teacup (as opposed to mixing in the chocolate in the saucepan). 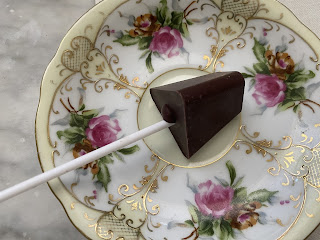 Here begins the fun part. Just dunk in the chocolate stick and mix it up. The beating motion of the mixing is enough to help give it that touch of texture you might get from using a whisk. Not wanting to have to wait for the drink to cool before I could have it, I may not have heated it up quite enough on the stove, as mine seemed a little slow to melt in and maybe also didn't melt in completely smoothly. But it was still perfectly fine, just let that be a note for anyone else that patience is worth it. 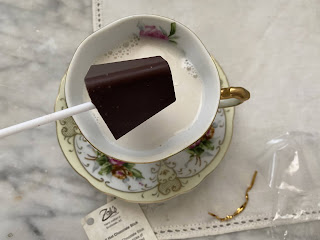 Given the semisweet aroma of the chocolate unmelted and given that Zak's tends to focus more on dark chocolate, I was surprised to find a pleasantly creamy aroma to the chocolate after it was all melted and mixed in. The color is fairly standard for a dark chocolate, not too light but also not super dark. So this isn't designed as a bittersweet drinking chocolate then. 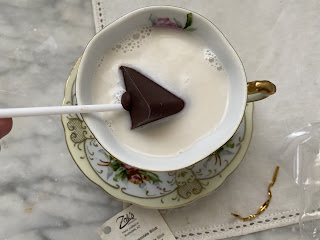 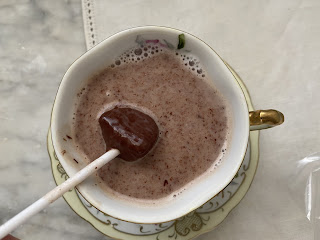 The balance with the chocolate and milk/whatever-you-use is good. You could maybe stretch it out a tad more if you wanted, but even though I often find myself doing that in this case I believe that would be too watery. Anything stronger also wouldn't work proportionally and probably wouldn't melt in right. 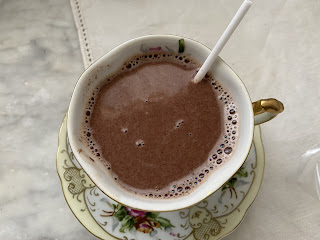 So as I said in the beginning, this is a simple product, a hot chocolate stir stick. But it's nicely done and makes for a fun break in routine. A little indulgence to satisfy curiosity.

Posted by Deanna Skaggs at 9:31 AM