Clara, Mr. Tiffany, and the Meaning of Art

I don't tend to read a large amount of historical fiction, do I? I'm very much into the nineteenth century, but generally I gravitate towards primary sources rather than historical fiction. And sometimes historical fiction, strange as it sounds to say, is too modern for me in its content and focus--so I'd just rather read a contemporary setting than a historical setting if I'm going to read a "new" book (that is, something published fairly recently versus at least a hundred years ago). Which isn't to say that I don't read any historical fiction; but I think I read more when I was in fifth grade through middle school than I do now.

Susan Vreeland's Clara and Mr. Tiffany, however, has been sitting on my shelves waiting to be read for a few years now. And since I mentioned that I'm trying to work my way through more of my unread books, well, it was time to break this one open. It certainly made a welcome foray back into historical fiction. 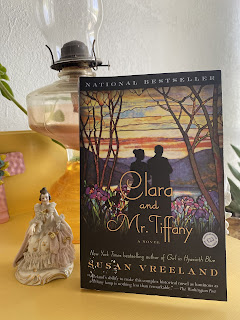 The focus is on Clara Driscoll, who headed the women's department at Tiffany studios, most particularly during the time when the company began making the now famous leaded-glass lamps. Although of course aspects of the book are fictionalized, there is a good deal of material based on Clara's letters. At the time the novel was published (2011), facts about Clara and the women's department had only recently been coming to light. So that gives us the story of a woman creating iconic designs and desperately wanting recognition for them--while we as readers know that during her lifetime and for years after she never really did receive that.

There is a deep sense of longing in this book. Clara longs for recognition. But as the years go by, she realizes that she doesn't just long for career recognition; she longs for human recognition. The book begins after the death of her husband, and she has various friends and potential lovers along the way, but it's a difficult journey for her to find the close connection for which she yearns. That's a pretty universal feeling. So while it's the sappier aspect of this book, it's also one that many readers, in particular women, will find some connection with.

Besides that, though, what is kind of fascinating about this book is the way that it discusses the theory behind art. There is all of this talk about whether Tiffany should focus on fine art or mass-produced products. Elaborate, ground-breaking beauty or cheaper-to-produce items that more people will be able to afford? Are the artisans simply skilled laborers or are they artists whose creative desires most be fulfilled lest they go stagnant? And as far as the lives of those artisans, what is most important to them? Is their work the most important? Tiffany employees women unlike any of its competitors, but only unmarried women. Clara sees her girls struggle with the pull between the two calls: they enjoy their work, but eventually many leave to get married. And in Clara's own life, what matters most?

Clara lives in the heart of the artsy, modern, Art Nouveau community. People live their lives as they wish and prize beauty above all else. We touch on exploration of the values of the aesthetes (like Oscar Wilde) who desire desire highest of all. We see the turn of the century, the time when the highly moral Victorian era gives way to pleasure pursuits that the Roaring Twenties will bring. Clara hovers, you might say, between art for art's sake or beauty for beauty's sake and the desire for beauty to bring meaning into one's life. That's what she learns during her time in this job. She began with a love for the craft and the art, and she ends with appreciation for how these jobs have changed the lives of the girls she has hired. Many of them are immigrants who have neither much material beauty in their lives nor much financial security. Clara gives them a place in the world, and finds that that contribution is possibly even more valuable than her artistic contribution to society.

I wouldn't necessarily say that I agree with all of the conclusions the characters draw in their discussions about life and art. But seeing a discussion of all of these concepts is interesting, especially given that how much was changing during that turn of the century time. So while I'm not putting this book on my list of favorites, it's a good read if you enjoy reading about art or the late Victorian/early 20th century era.

Posted by Deanna Skaggs at 8:53 AM