Me to We: Milk Chocolate + Coffee Nibs

This week's Milk Chocolate + Coffee Nibs from Me to We allows a comparison with last week's Espresso Dark Chocolate Baton from Trader Joe's. While the two chocolates are quite different, there is one trait they share fairly more in common than most coffee chocolates; but I'll get to that by and by. 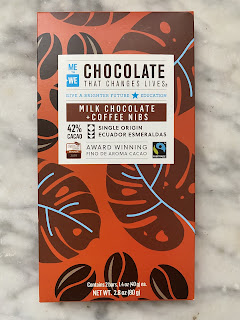 The now familiar Me to We packaging here has a red-based, tropical pattern reminiscent of a pattern you might seen on fabric. Happy and classy and informative all at once. There is a lot of info in that square label and yet even with the pattern, the look isn't weighed down or chaotic. Inside the card box are the usual two, separately-wrapped squares, each with their own divisions into four more squares. The seal tears open to a strong coffee aroma because lo and behold, those are certainly coffee nibs bedecking the back of the chocolate. There is a thick layer of large pieces of coffee beans that are indeed similar in size and look to cocoa nibs. I admit that I find the sight of them most intimidating. 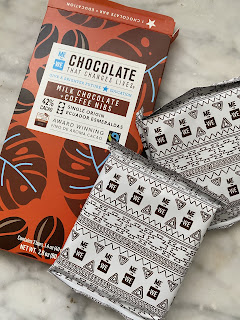 If I thought the Trader Joe's pieces were too larger, I'll mention again that Me to We's squares are also too big for my tastes. So I just took small bites into the squares; I started with coffee side up. The bite is soft because this is milk chocolate, after all, even if it's a higher cocoa content at 42%. Despite my fear over the thicker layer of coffee nibs, there wasn't too much coffee to crunch on; maybe this was partly due to my expectation of more. The fact that the milk chocolate melts more quickly than dark chocolate is also a factor: you begin to crunch on the coffee once the chocolate is mostly melted. This creates less of a feeling of intrusive coffee grains within the chocolate's smooth texture. And the coffee also isn't at all grainy; because these are large pieces, they're simply crunchy. The texture is more like cocoa nibs or shards of almond than it is like the grainy coffee grounds chocolate sometimes includes. 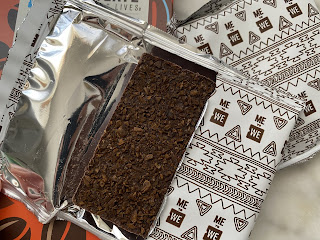 The aftertaste is of rich milk chocolate; you also get some of this in the second half of a bite, when it's partly through melting. The coffee taste isn't as strong as I would have expected, so you can still taste the richness and creaminess of the milk chocolate. It stands in like fresh cream in a cup of coffee. Somehow, when you go coffee side down, the chocolate tastes sweeter versus creamier. It's also, of course, the crunchier way to go and gives more of an initial espresso flavor from having the coffee directly on the tongue. Certainly it wasn't as intimidating of a way to approach this chocolate as I'd expected, though I do prefer coffee side up. 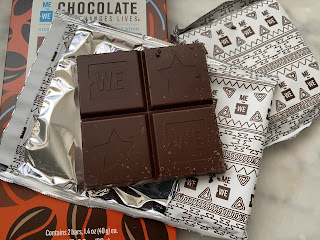 While I overall enjoyed the Trader Joe's coffee chocolate, I also critiqued the overly crunchy quality of the coffee within the chocolate. And yet I find myself praising that same quality in this chocolate. So does that mean I'm inconsistent? Not really. I still had some of the other chocolate left when I was digging into this one, so I was able to do a side by side. And the effect of texture in each chocolate is quite different. I would say that Me to We accomplished what the Trader Joe's bar was trying to do but didn't quite manage. By using slightly bigger coffee bean pieces and even by physically separating them from the chocolate (by only putting them on the outside), Me to We made the coffee into a pleasant and crunchy addition to the chocolate instead of an intrusion on the chocolate's texture. 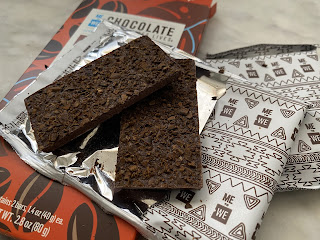 A rich milk chocolate is certainly one of the faces of chocolate that I enjoy, though I realize that some people might prefer the Trader Joe's approach simply because it uses a light dark chocolate instead of a milk chocolate. But if you're open to either/or, Me to We has a more successful approach to texture. I've never had a coffee chocolate like this, so I'm pretty thrilled. Coffee is a standard flavor, and it isn't common to experience something so new or unique with a standard flavor. Me to We in general is becoming one of my favorite chocolate brands to look at lately. I hope I continue to come across more of their products.

Posted by Deanna Skaggs at 8:21 AM

Labels: chocolate, Me to We, Milk Chocolate and Coffee Nibs, review