The Adventures of Connor Temple

As I take a break from paper-writing (I chose to write about Frederick Douglass's narrative, so I need something lighthearted now), let me present The Adventures of Connor Temple of Primeval. If you're not a Primeval person, you may or may not want to disregard this post.

Connor came from ebay yesterday. It's been years since I bought anything on ebay, but I don't think Americans have any other option for buying this series of action figures (there are some on Amazon, but they're the first set and I don't think I like them as much). If you find it odd for me to buy an action figure, remember that I called Primeval "my latest obsession." What else do you do when you have an obsession but buy merch? And in the interests of retaining at least a shred of respectability, I want to point out that I took these pictures yesterday; it seems not as bad to take a break from paper-writing to write this post as to actually take the pictures now, too.

I suppose, though, I hardly need talk about the why's of buying this item: don't I already own Barbie Jeannie and Bella? 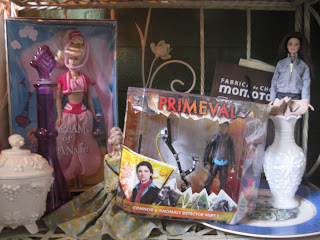 I briefly considered leaving the package closed (I did manage to do so with Jeannie, after all). But this packaging isn't so fatal as Barbie packaging: once you unwrap a Barbie, you have a mess, but this packaging was much simpler. 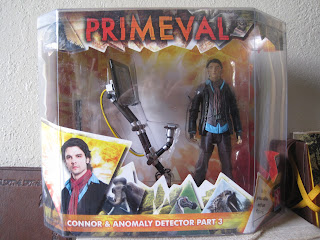 Connor comes with an anomaly detector, so he got right to work. (Is that my computer he's standing on?!) 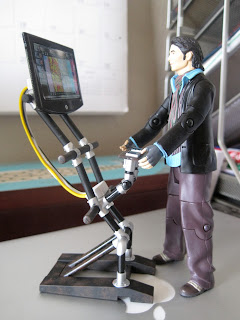 The figure doesn't look exactly right, but I suppose it's close enough. At least he has his signature fingerless gloves and scarf. And these really are pretty high quality as toys; all their joints bend enough to play with and they're designed to stand on their own. 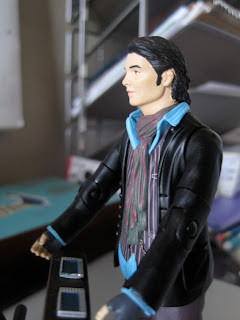 I guess Connor's on top of the world? 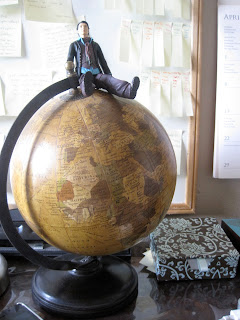 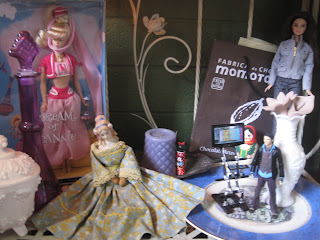 And must've detected something, because he next tried to save Bella from this giant lion. But she didn't know what he meant when he said it "must've come through an anomaly." 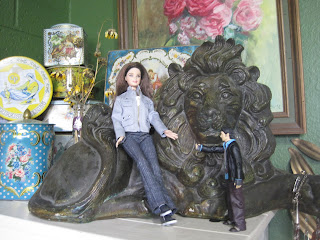 Connor then attempted to ask these people if they had seen Abby (I think he has begun to miss her), but they were otherwise occupied. 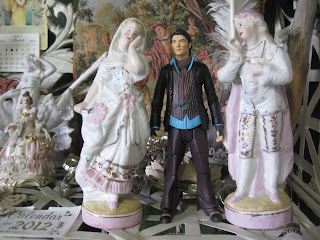 As if those two weren't uncomfortable enough, he then spotted not one but three giant birds. We all know what happened before when Connor was faced with giant birds (think Season 3 Episode 6). 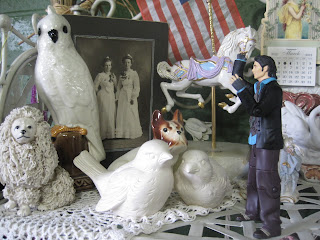 Luckily, he got away this time by means of a carousel horse. (You know, he reminds me a bit of Hatter in this one.) 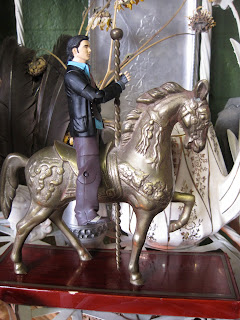 Although I have assured him that it's just a simple hourglass, Connor is convinced that this device he found will unlock the secrets of the anomalies and is now hard at work studying it. (I think he's just trying to get his mind off of the scary Victorian items in my room--it must be worse than Jess's apartment was.) 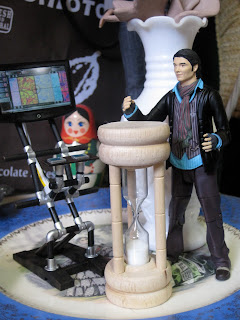 Now on to writing the second half of my paper.
Posted by Deanna Skaggs at 6:03 PM