When I purchased this book, I was aware that there are three books that basically just retell the first few episodes of Primeval in novel form--which there isn't much point to, from my view. I thought that this one was the only book that had a separate story not in the episodes, but it is actually the fourth of five such books.  An awkward mistake to make. I decided to go ahead and read it, anyway: I wasn't planning on buying/reading the others in any case. I just wanted to read one to soothe my Primeval obsession for a short time. After all, I like Star Wars, but I've never had the slightest interest in reading any of those books. 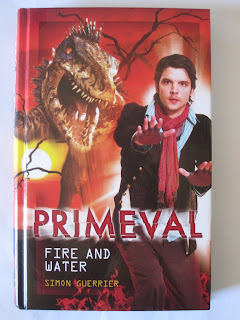 Fire and Water (by Simon Guerrier, published in 2009, putting the plot in the middle of Season 3) is a fairly short book at about 230 pages. I think it would be irrelevant to say much on the writing style since, as I said, anyone's reason for reading this book is going to be simply to extend their Primeval experience. The plot is complicated enough that it would take at least two TV episodes, maybe more, to cover it, but also designed in such a way that it can fit into the show without having plot lines that are necessary to know about. I was a little disappointed not to have more character details since that's something new that the novel form could allow. But the book just jumps right into the action and never really stops; I'm tempted to say that it lingers more on such things than the show does. There are a couple of "character conversations" (as between Connor and Abby, of course) and details you can easily imagine fitting into the Primeval universe (like Sarah recalling how Abby had advised her, when she started working there, to keep a set of makeup and extra clothes at the ARC), but nothing too much. I can't feel right about complaining, though: many details would move the novels to companions for the show rather than side pieces. And they have to stay separate enough that people who don't read them don't miss out on anything they need to follow along with the show.

I had seen an Amazon review that cautioned that the books (I'm not sure if this one in particular) were more violent/graphic than the show. Not sure I agree (unless I'm just too immune to reading violence after such things as Cormac McCarthy's Blood Meridian and Ken Brosky's Grendel). The show has some violent bits; I feel like the book has about the same amount, but it takes longer to describe the same thing than to look at it through a camera. And the word "gore" is used quite often: that isn't too descriptive--it only goes as violent as your imagination will take it. The worst bit is probably at the end of Chapter Twenty, and even that goes by quick.

I had also seen mixed reviews about character portrayals. I sort of agree with both sides. It's hard to imagine Lester having even gone on the mission in this book . . . but he speaks with his usual posh sarcasm. Connor's and Abby's lines are much improved if you try to imagine them spoken by the actors' accents, making you realize just how much actors have to bring to the lines on a script. But remember how we all had to suspend our sense of reality when we started watching Primeval, ignoring the less believable bits? It's the same thing with this book.

In fact, I managed rather well to get into the right mindset. The book turned out nearly as diversionary as the show, and I am now itching to get my hands on those other four (I'll go in order this time). It isn't because this is the type of book I just love to read--it's because I can't get enough Primeval.
Posted by Deanna Skaggs at 6:53 PM