The Invention of Hugo Cabret

A month or two ago, I posted my particularly delirious thoughts after watching the movie Hugo; click here to read that post. Today I decided to reward myself for finishing one of my writing assignments by finally reading the book to inspire the movie (I didn't have any other plans for the evening, didn't want to do more work, and didn't really want to be a slug and watch Netflix/YouTube for the whole night). 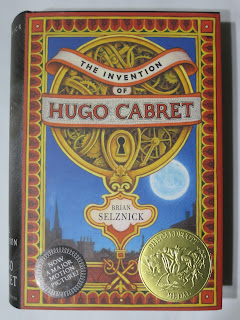 The book's full title is The Invention of Hugo Cabret, and its author is Brian Selznick, and it is a brilliant book. Just wonderful. I mentioned in my other post the similarities with A Little Princess and Oliver Twist. Let me add another fictional character Hugo now reminds me of: Bran from Kaleb Nation's Bran Hambric series. That connection mainly comes from the combination of orphanhood with a tendency for drawing.

As I moved through the opening pages, I was amazed at how well the movie captured many of the images and the overall tone of the book. They treated the adaptation well and drew from what makes this book unique.

What makes it unique is also what makes it so expensive; the list price is twenty-five dollars, although Amazon sells it for less, of course. That's because about half of the five hundred or so pages are pictures. But it isn't quite like a graphic novel or a picture book. It is primarily a novel, even if one that even my slowness was able to read in three hours. The pictures act like film slides. This is why it works that some of them don't have the greatest detail (they still convey what matters, though): it's better if you don't move through them too slowly, as you would if you were taking in many small details. Your hands become the projector that moves the slides that compose the story. It's really rather thrilling, and it's also amazing that film can be not just a subject but a theme of this book. I particularly love the way that, like in the movie, this artistic theme is paired along with mechanics.

This book is such a success. It isn't overstated; it isn't understated--it's real. It's emotion, thought, art, interaction, history, time, and place all expressed in between two covers.
Posted by Deanna Skaggs at 9:16 PM