Two months ago, I posted my thoughts on Fire and Water, which I had purchased without realizing that it was in fact the fourth separate-adventure Primeval book. You can read that post by clicking here. 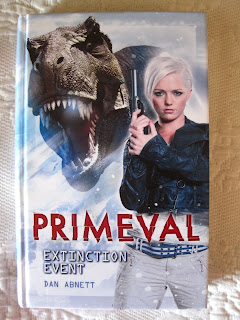 I have backed up now to what I thought was the first book, Extinction Event by Dan Abnett. But, no, I messed up the order again--this is the third (out of four). That's embarrassing. Anyway, certain things I said for Fire and Water also apply here; mainly, that my interest is first in Primeval and only second on the book itself. But somehow I think I enjoyed Extinction Event more (though it's difficult to say after two months from when I read the other), likely for two reasons.

The first reason is that this book I think relied more on suspense and a sometimes eerie setting, whereas the other was from the start a little more of a fast-paced, in your face type of thing (not saying that's necessarily bad--it's just different). The plot of this book was very interesting; I loved where they took the idea of anomalies. And Baba Yaga is utterly brilliant (just read the book and you'll find out what I'm talking about)--I wish I knew who first came up with that comparison (it might have been the author, or it might have been someone else). This character is so spooky and often times so subtle--wonderful.

The second reason is that it more often features the characters I like more. While Connor and Abby (you do know by now that they're my favorites, right?) were in Fire and Water, but the sections they were in often focused more on Sarah. If the book had a main character, it was Danny. But Extinction Event (since it takes place right between Seasons 1 and 2) features Cutter and also has a bit of Helen and Jenny. And I would say there is more of Connor and Abby in this one--at least of them taking part in the action.

I think I may have just come across the reason I enjoyed this book more: it echoes the earlier tone of Primeval the show more than Fire and Water does. It's more about observing nature, dealing with the anomalies and learning about them, simultaneously being fascinated by and trying to escape unharmed from creatures, a few jokes, character relations. It's light and fun, while still having the entertainment of a measure of ultimate danger.

Now the question is, do I read a different book first or do I move on to read Shadow of the Jaguar and The Lost Island, which are sitting on my shelf waiting for me (figuratively: I don't really have a bookshelf anymore, as I've mentioned)?
Posted by Deanna Skaggs at 10:13 PM