Since I enjoyed Gayle Forman's If I Stay and its sequel Where She Went so much, it was time I read one of her earlier works, as well. Sisters in Sanity is from 2007, and while I wouldn't say it is as wonderful a book as those, still it shows the development of things I enjoyed in their pages. 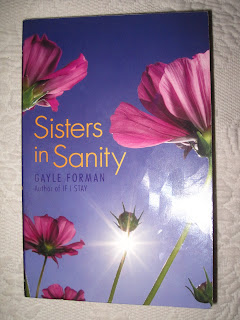 The basic plot is about a girl who has lost her mother and whose dad/stepmother send her to a boarding school for troubled teens that turns out to have the opposite of helpful counseling/fair living conditions; she makes friends with a couple of other girls at the school, and they help each other out and keep their spirits up by knowing that they all care. While some of the school's conditions made me indignant at the staff, somehow it became an enjoyable novel to read. There is a lightness of spirit and also a strength of character in it. It isn't so much about uncovering a harsh school (the school featured is fictional, though the author's note does point out, along with this fact, that there are schools out there not giving the proper conditions to actually help people), but about gaps and overcoming them.

There are the obvious generational gaps, the gaps between categories (similar to cliques), gaps between people in the know and people who are ignorant, gaps between those who have found healing and those who are on the way and those still in denial. This book is about overcoming whatever it is that comes to trouble you by relying on yourself, but also by confiding in love and companionship.

It's a short read--I read it over two days. Honestly, I didn't want to spend more time on it, though it is a nice piece of work. Recommended for fans of Gayle Forman's other works and readers who enjoy a good teen story.
Posted by Deanna Skaggs at 11:07 PM