Since I had already, unintentionally, read the last two books of Primeval spin-offs (Fire and Water and Extinction Event) in reverse order, I decided that it would make sense to continue this order and read book two, The Lost Island, next rather than book one. The advantage to reading the set in the wrong order is that I have discovered that order doesn't particularly matter--provided, of course, you have watched at least Seasons One through Three first. There are minor allusions to what went on in previous books, but nothing that will spoil your reading experience. 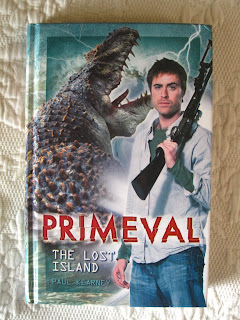 The Lost Island, at about 220 pages, is shorter than the other two books I read, and its plot is also the least complicated. In fact, it seems a very skimpy plot--it seems like it is building up, but it never really becomes much. It's a lot of walking, rain, cold, shooting creatures, getting eaten by creatures. Then at page 221, it just ends; it doesn't even feel like the team completed a mission--it's more like they just decided it was over.

A note on the violence issue, which I touched on when I talked about Fire and Water. In Extinction Event, most of the gorier stuff happened to the creatures, which meant there was some detachment to it. But many people are injured and mutilated in The Lost Island; it does seem generally heavier than the show's violence, but none of it bothered me.

What did bother me was that there was some language in this one. There were probably a few words here and there in the other two books, but this time they were scattered on much thicker. Admittedly, many of the characters were soldiers and the plot did involve a lot of hiking in the cold and rain, as I mentioned, so I suppose a little language just comes with the setting. But it just didn't feel Primeval-y to me (neither did Cutter being slightly borderline tipsy around the beginning of the book).

All of this said, I think it's obvious this was the book I enjoyed least so far. While it had a couple of character moments I enjoyed, a few thrills, and the occasional plot interest, most of it didn't feel up to par--I would have liked to see it taken a little further.
Posted by Deanna Skaggs at 11:35 PM